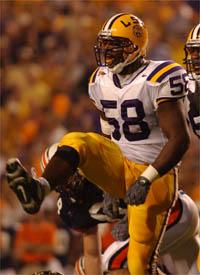 BATON ROUGE — LSU football head coach Nick Saban addressed the media today at his weekly press luncheon held at the LSU Athletics Department in the fifth floor conference room. Archived video is now available on LSUsports.tv to all members. A complete transcript of the press conference is below.

“I was very pleased with the effort that we had in the Auburn game. I think it was a big win and a good win for us. The thing that I was most pleased about was the attitude that the players went into the game with. We just kind of took care of business in all phases of the game. I hope we can learn that by taking that approach in the last two weeks that we have been able to play pretty consistent football. We have been able to move the ball, stop the ball, and make some plays on special teams. Hopefully we will be able to continue that approach in each and every one of our games in the future. That will make us play with the same kind of consistency.”

“We had three offensive players of the week. Michael Clayton was outstanding in the game, not only by catching passes and scoring a touchdown, but also by doing a good job of blocking in the game. Justin Vincent went over a hundred yards in the game. Andrew Whitworth was very physical on the line of scrimmage. I think our whole offensive line did a great job in this game against a very good front seven. Chad Lavalais, obviously, was (team) defensive player of the week and the SEC Defensive Player of the Week. He played a phenomenal game, but Eric Alexander also played very well, so we have two defensive players of the week. Adrian Mayes, Chad White, and Skyler Green were all guys who did an outstanding job on special teams.”

“This week is a little different kind of challenge for us. Louisiana Tech is a team that has made a living over beating major division one schools. They had wins over Alabama and Oklahoma State a year ago. Michigan State’s only loss this year was to them. They are a team that scores a lot of points. Their quarterback is very effective. They throw the ball for over 300 yards a game, but they also have a runner that is approaching 900 yards rushing this year. They are a very challenging team to play, relative to their ability to score points. It will be a real challenge for our team to be able to match up with these guys. I think they have done a very good job in their program up there, and I think they have some very good skill players. They have a good specialist in the return game on special teams. They have given up some points, but they have played hard and with a lot of toughness on defense.”

“This will, obviously, have to be a game where we have to take care of business and play good football. I know some people, not defining who some people are, will try to create this as not a very important game. To our team, this is a very important game. Certainly, some people can rain on your homecoming but some people can rain on your season. Obviously, this would be raining on the season if we don’t get ready to play a good football game this week. I think there will only be three guys that won’t be practicing today. Stephen Peterman will probably be out just for today. Dave Peterson is sick. Demetri Robinson has a pulled groin, and he did it last week in practice. He may be out again today, and maybe day-to-day this week.”

On the status of Joseph Addai and Shyrone Carey

“I think Joseph Addai is probably going to be in a red shirt trying to work his way back into drills. Shyrone (Carey) will try to work more as a guy that we are trying to get ready to play this week. Last week we were trying to find out if he could play and how far along he could get. If he does not have any problems I will assume that he will be able to play and play well in this game. We will just have to take him day-to-day in practice, and he will go full speed. Joseph will be in drill work. We will just have to see what he can do and where he is. It is too early to tell about him.

On the play of the receivers this season

“I’m very pleased with the way our receivers are playing. They have all had occasions to make big plays and they have made them. We have some other big plays that have just been kind of left out there on the table, not because of what they did or didn’t do, but not being able to finish the plays for whatever reason. I think that is something that we need to improve on in the future. I think all three of those guys at times have played well and improved. They are playing with more consistency in each game, and I think that is important for us. I also think it is important for us to play like we have played the last couple of weeks. We are tying the run and the pass together. If a team loads up the box, we throw the ball. If they don’t, we run it. This has made both parts of our game more effective. I think this has also helped our quarterback. He has done a good job. When we have the opportunities to make big plays, we have very good skill guys and wide receivers to make them.”

On the play of Chad Lavalais

“Chad (Lavalais) has always played very well for us. When he was a sophomore, he had a phenomenal season, the year we won the championship. He has gotten a little bigger and stronger. When he was a freshman, he played hard and made a lot of plays but sometimes got pushed around a little bit. Last year he was hurt a lot, but this year he has just been relentless in the way he has competed and played in every game. He has tremendous quickness as a player and has pretty good strength to go with it. Those two things make it difficult to block him and handle him inside. Chad is a very bright guy and instinctive football player. I think he is very confident and understands everything we are doing.”

On having two capable punt returners

“We feel we have two capable punt returners. Skyler (Green) has done a great job back there. We will probably continue with him and integrate Shyrone  Carey) slowly in practice and see what he can do and how effective he is. We may try to take him off of some of those things so he can just get back into the running back part of it. We have 100 percent confidence in both guys because they have been doing an exceptionally good job. Skyler has great running ability with the ball, great quickness and change of direction. Those are all assets as a receiver and also a return man. I think he is very instinctive as a runner as well.”

On the play of Andrew Whitworth

“I think consistency is the biggest thing with him. He is a great pass blocker. He does a good job on the run. He plays smart in terms of his technique and execution. As an offensive lineman, you don’t get to score touchdowns, don’t get to run the ball, and don’t get your name in the paper. You have one of the toughest jobs on the field. He has done that with the most consistency of any offensive linemen who plays on our team.”