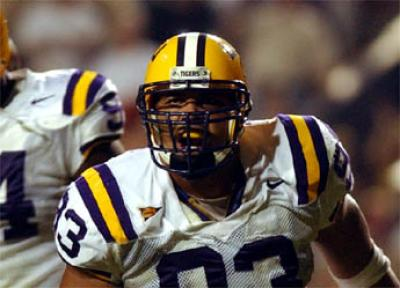 BATON ROUGE — LSU defensive tackle Chad Lavalais has been named the Southeastern Conference Defensive Player of the Week for his part in the Tigers’ 31-7 win over 17th-ranked Auburn on Saturday in Tiger Stadium, the league office announced on Monday.

Lavalais, a senior from Marksville, La., recorded eight tackles, including three totaling 24-yards in losses to lead an LSU defense that held Auburn to only 50 yards rushing, more than 150 yards below its season average. Lavalais also added a quarterback sack for a 13-yard loss in the contest.

One of the biggest plays of the game for Lavalais came in the first quarter when he tackled Auburn’s Cadillac Williams for a 5-yard loss on a fourth-and-one situation at midfield. That tackle turned the ball over on downs to LSU and eventually led to a Tiger touchdown and a 14-0 lead.

The honor for Lavalais marks the second time this year in which an LSU player has received the SEC Defensive Player of the Week award. Corey Webster was the league’s player of the week following LSU’s win over Georgia in week four.