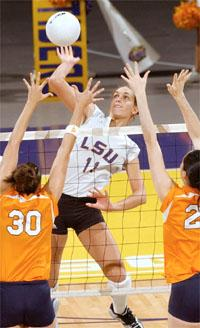 The junior from Carrollton, Texas, led the team with 3.29 digs per game as LSU went 1-1 on the week. On Friday, the Tigers lost a hard fought match to the second-ranked Hawai’i Rainbow Wahine, which had only lost one match this season, but bounced back to take a significant win over Tennessee on Sunday.