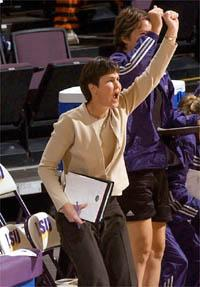 With the win LSU improved to 10-13 overall and evened its record in Southeastern Conference play at 5-5 on the year. The Tigers have now won four of their five Sunday conference matches this season. The Lady Vols dropped their second straight and fell to 16-6 overall and 6-4 in league play.

“Tennessee is a very good team so this is a significant win for us,” said Flory. “We won every hard point today, which showed that we played with heart and desire throughout the match. I said last week that we took our inspiration from the football team’s win over South Carolina and I think we did the same again this week.”

The win, coupled with a win by Alabama over Ole Miss, kept LSU in a tie for second place in the SEC Western Division and in a tie for fifth in the overall standings with the Crimson Tide with six matches remaining. The Tigers stand behind Arkansas, which is a perfect 10-0 in the league and leads the West. Florida, Georgia and Tennessee remain ahead of LSU in the overall SEC standings.

“This win shows our resilience,” said Flory. “It was a key win for us. We needed it to maintain our position in the standings and give us an opportunity to try to secure that second spot in the SEC West.”

In her 13th season as a collegiate head coach, Flory recorded her 200th career victory. She recorded the 200 wins in stints as a head coach at Wittenburg University, Southeastern Louisiana, Kentucky and LSU. In addition, it was also her 90th win as a Tiger. She is currently the third-winningest head coach in LSU history, just five wins behind Gerry Owens.

“I think this was as good a performance we have had out of our two outside hitters that we have had all season,” said Flory.

Regan Hood recorded her seventh double-double of the season with 16 kills and 15 digs. She also had three blocks. Both Rachel Pittman and Beth Cowley posted double-digit dig performances, with 14 and 10 respectively. Megan Heinz led the team with four blocks, despite playing in just two of the four games.

Michelle Piantadosi led Tennessee with 21 kills, followed by Amy Morris with 19. Morris also had 14 digs, while Julie Knytych matched her with 14 digs. Heather Harrington led the match with nine blocks.

In the first game, the game went back and forth as neither team could take more than a two-point advantage until late in the match. With the scored tied at 20, Tennessee put up three-straight points for the 23-20 lead. With LSU trailing, 27-24, the Tigers mounted a 3-0 rally of their own to tie the match. Tied at 28, the Lady Vols scored to give them their first of two-straight game points, but Tennessee could not convert. Tied at 31, LSU had four chances to take the game before finally putting it away, 35-33, on an attack error by Morris.

The third game played out in much the same way as game one. With the score tied at 12, Tennessee went on a 3-0 run for a 15-12 advantage. The Tigers rallied back to tie the match at 17, before extending the lead to 20-17. With LSU leading 23-19, the Lady Vols came back to tie the game at 27. The Tigers then scored two straight to send it to game point. Tennessee fought off the first game point, before LSU closed out the game on a kill by Hood to take the two games to one advantage, 30-28.

The Tigers will take on Mississippi State and Ole Miss next weekend to close out the 2003 home schedule. LSU hosts MSU on Halloween at 7 p.m., while the Tigers take on the Lady Rebels on Sunday at 1:30 p.m.