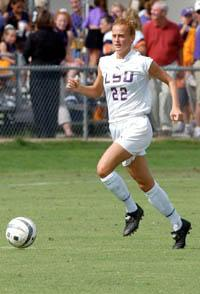 “This was a tough match versus a very good team on their home field and we were not able to do anything offensively all game,” said LSU head coach George Fotopoulos. “Auburn is a very good team and they played well and did what they had to do to get a win.”

LSU (9-7-1, 2-6 SEC) could not generate any offense against the defending SEC champions, playing with extra emotion on Senior Day. Auburn honored five seniors in a pre-game ceremony that included a short speech by head coach Karen Hoppa. The host Tigers improved to 12-2-3 overall and 5-1-2 in the SEC. Auburn clinched at least a share of the SEC Western Division title on Sunday thanks to Ole Miss’ loss to Florida in double overtime. The Tigers have won the division in each of the last two seasons.

Auburn jumped on the board early as forward Chrissy Culver recorded her third goal of the season just 1:48 into the match with the assist going to forward Carly Thomas. Culver received a pass from Thomas roughly three yards shy of the goal and fired the ball past LSU goalkeeper Robyn DesOrmeaux into the back of the net.

Auburn made it 2-0 as midfielder Jada Stewart was credited with a goal following a corner kick taken by junior Sarah Steinmann with only 15:14 left in the first half. Ashley Eason was awarded the assist. LSU midfielder Stephanie Keating appeared to knock the ball into the net in her attempt to make a save by kicking it out of the goal but could not.

The hometown Tigers took the 2-0 lead into the intermission, out-shooting LSU 4-1. Auburn recorded three shots on goal to LSU’s one.

LSU fell to 4-6 all-time versus Auburn and have yet to win on Auburn’s home turf. Auburn out-shot LSU 12-3 and had six shots on goal to LSU’s two. Auburn took five corner kicks while LSU finished with just one. The two teams also combined to rack up 34 fouls.

LSU will face in-state rival Nicholls State on Wednesday at 4 p.m. in Thibodaux, La. The game time may be changed and that possible change will be announced early in the week. The Tigers will wrap up SEC play at Arkansas on Halloween night in Fayetteville, Ark., at 7 p.m.