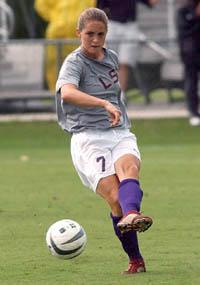 AUBURN, Ala. — The LSU soccer team will face Southeastern Conference Western Division-rival Auburn on Sunday at 2 p.m. at the Auburn University Soccer Complex.

“This is going to be a tough match because Auburn is a great team and they are playing at home on senior day, so this will truly be a challenge for our team,” said LSU head coach George Fotopoulos.

LSU (9-6-1, 2-5 SEC) is in desperate need of a win to keep any hopes of making the SEC Tournament alive after a tough 3-2 loss to Alabama in Tuscaloosa, Ala., on Friday night. The Tigers jumped out to a quick lead on Friday, as junior forward Artie Brown scored a goal just 21 seconds into the match, setting a school record, but the Tide came back with three-consecutive scores to put the match away.

Auburn currently leads the Western Division with a 4-1-2 record and is coming off of a 2-0 win over Arkansas on Friday. LSU won the last meeting between the two teams, upsetting No. 1 seed Auburn in the first round of the 2002 SEC Tournament by a score of 1-0. The Tigers became the first eighth-seeded team to ever knock off a top seed in tournament history. Auburn leads the all-time series 5-4.

LSU will face in-state rival Nicholls State on Wednesday in Thibodaux, La., and will travel to Fayetteville, Ark., to face Arkansas on Oct. 31 for its final SEC match.