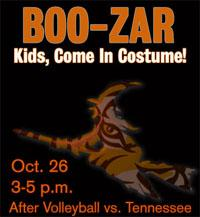 BATON ROUGE — The LSU volleyball team returns to Southeastern Conference action against Tennessee on Sunday at 1:30 p.m. in the Maravich Center. Adults who bring a food donation to the volleyball match will be admitted for $3 and children in costume will be allowed admittance for $1 to kick off the CHAMPS Thanksgiving Food Drive.

Following the match, the LSU CHAMPS (Challenging Athletes Minds for Personal Success) program is sponsoring the annual BOOzar on the upper  oncourse of the PMAC. The eighth annual BOOzar will take place from 3-5 p.m. and feature athletes from all of the Tiger athletic programs.

Area families are invited to enjoy a safe afternoon of Halloween fun and trick-or-treating. Children are encouraged to wear costumes. Last year over 500 children and 100 student-athletes participated in the event.

The Tigers (9-13, 4-5 SEC) dropped a 3-0 decision to No. 2 Hawaii on Friday night in the Maravich Center. LSU challenged the Rainbow Wahine in the second and third games, but could not overcome late runs by Hawaii and ultimately lost the match.

“After having the sixth-largest attendance in school history against Hawaii on Friday night and a television audience throughout southern Louisiana, I hope that people in this area were left with the idea that volleyball was an exciting sport and something that they are interested in coming back to see,” said LSU head coach Fran Flory. “Having the BOOzar attached to our match once again gives us a great opportunity to expand our audience and hopefully we will bring volleyball to a wider group of people, especially young girls, that will be interested in coming back to see us play and participating in volleyball in the future.”

After winning four matches in a row, Tennessee (16-5, 6-3 SEC) lost a 3-0 match at Arkansas on Friday night. The loss dropped the Lady Vols into third place in the SEC Eastern Division, while LSU stands in a tie for second in the SEC West.

“We are a young team, playing with five freshmen on the court at times,” said Flory, “but the time has come that we can’t play like a young team anymore. We have got to take advantages of situations and play like a veteran team in order to be successful in the SEC the remainder of the season.”

Junior Regan Hood leads the Tiger attack with 4.40 kills per game. The middle blocker from Carrollton, Texas, also has a team-best 57 block solos and is second on the team with 0.99 blocks per game and 2.23 digs per game.

Sophomore Megan Heinz leads LSU with 1.18 blocks per game, while junior Rachel Pittman has a team best 2.35 digs per game. Freshman Daniela Romero ranks ninth in the SEC with 10.39 assists per game.

The Lady Vols are led by Kristen Andre with 3.33 kills per game, while hitting at a team-best .384 clip. Sarah Blum leads Tennessee with 1.39 blocks per game, as Amy Morris records 3.30 digs per game to lead the team.

The Tigers will take on Mississippi State and Ole Miss next weekend to close out the 2003 home schedule. LSU hosts MSU on Halloween at 7 p.m., while the Tigers take on the Lady Rebels on Sunday at 1:30 p.m.