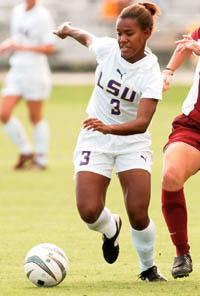 TUSCALOOSA, Ala. — The LSU soccer team dropped a heartbreaking 3-2 decision to the Alabama Crimson Tide on Friday night at the Alabama Soccer Complex, a loss which severely hurts the Tigers’ chances of making the SEC Tournament.

“This was a tough game to lose after getting off to such a good start, but once they (Alabama) got up 3-1 it was just too much for our team to overcome and that is the bottom line,” said LSU head coach George Fotopoulos.

LSU wasted no time in getting on the board as junior forward Artie Brown recorded her team-leading 12th goal just 21 seconds into the match, setting a school record for the fastest goal scored to open a match and it looked as if the Tigers were in business. Brown controlled the ball on the left side of the goal and then knocked the ball past Alabama goalkeeper Laura Lowman into the right corner of the net at the 44:39 mark. The previous record for fastest goal scored to open a match was by Jackie Cooper (1:09) against McNeese State on Nov. 1, 1996.

Brown now has 25 goals in her career and is just two away from tying former teammate Mandy Heintz for second-best all-time in school history.

The Crimson Tide evened the score at the 30:04 mark in the half as midfielder Allison DeLisle scored her first goal of the season with the assist going to forward Libby Probst.

Probst had a chance to put the Tide ahead as she had the ball alone with just under 20 minutes left in the half, but LSU goalkeeper Robyn DesOrmeaux made a fantastic save, knocking the ball off her chest and recovering it to keep the game tied.

The Tide’s Suzanne Baker could have broken the tie just before halftime as she had an open shot at the goal but DesOrmeaux tipped the ball with one hand over the net with just 36 seconds left in the half. LSU survived a subsequent Alabama corner kick with no trouble and served the ball downfield to end the half.

Alabama out-shot LSU 6-3 in the first half and took three corner kicks to the Tigers’ one. The two teams played physical ball in the first period as Alabama picked up 11 fouls while LSU had eight.

The Tide took a 2-1 lead with 38:35 remaining in the match following a corner kick as Alabama forward Kylie Boyd got her second goal of the season with the assist credited to Gilliam Kilburn, marking the first time this season that the Tide have scored two goals in a conference match. Alabama made it 3-1 with just under 30 minutes left in the match as Dawn Nash headed the ball into the net past DesOrmeaux after a corner kick. The assists went to Kilburn and DeLisle.

Freshman forward Stacy Bishop cut the score to 3-2 with just under 20 minutes left in the game as she notched her 11th goal of the season. Bishop had a chance to tie the score roughly seven minutes later as the Alabama defense left her all alone in the middle of the field but she fired the ball directly into Laura Lowman’s chest to keep the game at 3-2.

The Tigers had a chance to tie the match at the one-minute mark but Lowman saved LSU’s shot. Bishop then took a free kick with under 10 seconds left in the match but her shot sailed wide left and the clock expired to secure the win for Alabama.

The Tigers complete the road trip with a match versus the Auburn Tigers on Sunday at 2 p.m. while Alabama will play host to Arkansas.