Volleyball Falls in Three Games to No. 2 Hawai'i 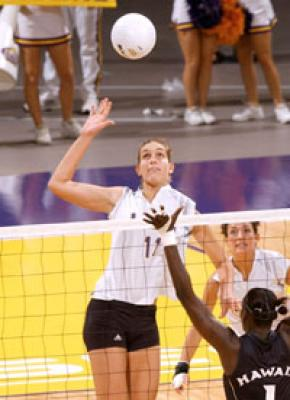 BATON ROUGE — In front of the sixth-largest crowd in LSU volleyball history, the Tigers put up a tough fight, but ultimately fell to the second-ranked Hawai’i Rainbow Wahine, 30-13, 30-23, 30-22, in a non-conference match on Friday night at the Maravich Center.

With the loss the Tigers dropped to 9-13 on the season, while the win moved Hawai’i to 22-1 on the year. The Rainbow Wahine have now won 21 consecutive matches and have lost just 10 games this season.

In front of a crowd of 1,313, LSU was overwhelmed in the first game before fighting back to challenge the No. 2 team in the country down to the end in games two and three. Late runs by Hawai’i ultimately sealed the Tigers fate and helped the Rainbow Wahine improve to 3-0 all-time over LSU.

“We had that deer in the headlights look in the first game,” said LSU head coach Fran Flory. “We played afraid and reserved and were not in the mode to attack. I was glad that we rallied through and found ourselves.”

“We’ve got to go out and attack every ball but we gave too many chances away to be successful,” Flory continued. “We did make them raise their level a couple of times but unfortunately we did not do that as much as we needed to.”

Regan Hood led the Tigers with nine kills and eight digs, while hitting at a .214 clip. Markeisha Constant also added nine kills for LSU, followed by Lauren Leaumont and Kassi Mikulik with seven each.

The third game played out in much the same way as the second. The Tigers held the 13-11 lead before the Rainbow Wahine came back to take the lead, 15-14, on their way to an 18-14 advantage. LSU could get no closer than three, 18-15, the remainder of the way as Hawai’i closed out the game and the match, 30-22.

“I wish we would have had a little better performance for the crowd,” said Flory. “Despite the outcome, I hope the image they left the match with is that volleyball is a great sport and something that they are interested in coming back to see in the future.”

The Tigers will return to SEC play on Sunday against Tennessee at 1:30 p.m. in the Maravich Center. Following the match, the LSU CHAMPS (Challenging Athletes Minds for Personal Success) program will be sponsoring the annual BOOzar on the upper concourse of the PMAC. Adults who bring a food donation to the volleyball match will be admitted for $3 and children in costume will be allowed admittance for $1 to kick off the CHAMPS Thanksgiving Food Drive.

The eighth annual BOO-zar will take place from 3-5 p.m. and feature athletes from all of the Tiger athletic programs. Area families are invited to enjoy a safe afternoon of Halloween fun and trick-or- treating. Children are encouraged to wear costumes. Last year over 500 children and 100 student-athletes participated in the event.