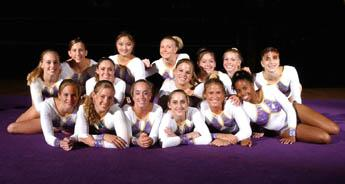 LSU Athletics Director Skip Bertman and head coach D-D Breaux and staff were on hand to honor the team for there many accomplishments both on the floor of competition and in the classroom during the 2003 campaign.

Individuals were also acknowledged for their superior athletic endeavors throughout the course of the season. April Burkholder was honored as the SEC’s Freshman of the Year, while Annie Gagnon was recognized for earning All-America accolades on the bars at the NCAA Championships.

Burkholder and Katherine Hilton were also acknowledged for their All-SEC accolades earned at the conference meet. Hilton was an honoree on the bars, while Burkholder was recognized on the beam and in the all-around.

Annie Gagnon was named the recipient of the Dee Dee Fulmer Gilbert Award, for exemplifying the meaning of a true student-athlete who excels not only in competition, but also in the classroom.

The Tigers’ 2004 season begins Jan. 9, 2004 when they open the season with a quad meet at Michigan State. LSU returns 12 letterwinners and welcomes three freshmen for the 2004 campaign.