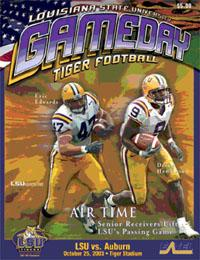 BATON ROUGE — Fifteen years ago, LSU shook the Earth as the Tigers recorded a 7-6 last-minute win over then-No. 4 ranked Auburn in Tiger Stadium on its way to a share of the Southeastern Conference title.

The roar of the crowd on the game-winning touchdown reception by Eddie Fuller was so loud that it registered on the seismograph machine across the LSU campus in the Geology Department. While there might not be any Earth-shaking occurrences on Saturday, one thing is for certain and that’s when LSU and Auburn meet on the football field anything can happen.

Take for example, in 1994 with LSU appearing to have the game well in hand, Auburn picked off five fourth quarter passes, returning three for touchdowns in an unlikely, 30-28 win over the Tigers. A year later, LSU ushered in the Gerry DiNardo era with a 12-6 win in the “Bring Back the Magic Game” in Tiger Stadium as the Tigers upset fifth-ranked Auburn.

Fans attending the 1996 game in Auburn, watched the teams battle on the football field while a blazing fire, which reached at least six stories high, erupted, burning down the Auburn Sports Arena just a couple hundred yards from Jordan-Hare Stadium. LSU won that game, 19-15.

The two teams meet again on Saturday at 6:45 p.m. in Baton Rouge with the winner of the contest getting a leg up on yet another SEC Western Division title. The game will be televised nationally by ESPN. The game is being billed as “Shake, Rattle and Gold” and LSU fans are encouraged to wear gold shirts to the game.

LSU, ranked No. 9 in the nation in both major polls, comes into the contest with a 6-1 overall mark and a 3-1 league record. LSU is coming off a 33-7 win over South Carolina, a game in which the Tigers held the Gamecocks to zero rushing yards.

Auburn, winners of five straight after opening the season with losses to Southern Cal and Georgia Tech, stands at 5-2 overall and 4-0 in league play. Auburn is ranked No. 17 in one poll and No. 21 in another.

Against Auburn, LSU will face the one of the nation’s best running teams, which is led by Cadillac Williams and Ronnie Brown. Auburn comes into the contest averaging over 200 yards rushing a contest. LSU, on the other hand, is the nations best at defending the run, allowing only 53.1 yards on the ground a game.

“We are obviously playing a good football team in Auburn this week,” LSU coach Nick Saban said. “They have won five-straight games and have run the football as well or better than anybody else in the country and they have two outstanding running backs- Cadillac Williams and Ronnie Brown.”

Williams, who earned SEC Player of the Week for an unprecedented third straight week on Monday, scored a school-record six TDs in last week’s win over Mississippi State. Through seven games, Williams has rushed for 713 yards and a league-leading 10 touchdowns.

When Auburn is not running the ball, they turn the offense over to quarterback Jason Campbell, who has completed 89 of 145 passes for 1,127 yards, five touchdowns and only three interceptions.

“Jason Campbell has done a fantastic job this year of managing their offense, not making mistakes and doing the things that they need him to do to make them an effective offense,” Saban said.

When LSU has the ball, they will go against one of the top defenses in the SEC as Auburn is allowing only 12.4 points and just 277.7 yards per game. Linebackers Karlos Dansby and Dontarrious Thomas lead the Tigers.

“Those two linebackers are probably the best two that I have seen anywhere on any team for a while,” Saban said. “They have an excellent overall defense and they do a good job up front, in the secondary, and they do not have a lot of weaknesses.”

Mauck enters the contest ranked second in the SEC in passing TDs with 12 and he’s third in the league in pass efficiency with a 142.5 rating. Through seven games, Mauck has completed 115 of 182 passes for 1,389 yards, 12 touchdowns and six interceptions.

The Tiger running back will center around freshmen Justin Vincent and Alley Broussard, who are taking the place of injured backs Joseph Addai and Shyrone Carey. Last week, Broussard rushed for 108 yards and Vincent had 77 yards and two touchdowns in the win over South Carolina.