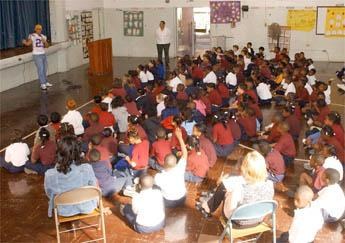 BATON ROUGE — The Cox Communications Academic Center for Student-Athletes honored six LSU student-athletes for their academic achievements and community service for the month of October.

Hazelann Regis, Joseph Addai, Melody Clark, LaDonia Hughes and Clayton Dirks were selected as the student-athletes of the month for October, while Jason Spadoni was chosen the Shaquille O’Neal CHAMPS/Life Skills student-athlete of the month.

Regis is a senior from St.Andrew’s,Grenada. She runs the 200 and 400 meters for the defending NCAA Outdoor National Champion Lady Tiger track team. She finished fifth in the 400 meters and anchored the 4×400 relay that finished as the national runners-up at the 2003 NCAA Outdoor Championships.

Addai is a sophomore from Houston, Texas. The Tigers’ leading rusher in three of their seven games, he rushed for a career-high 86 yards and two touchdowns in LSU’s win over Arizona on the road this season.

Clark is a freshman middle blocker on the volleyball team from Colorado Springs, Colo. Against Ole Miss, she recorded the first double-figure kill game of her career with 10 kills on 25 attempts. She led the team with five blocks against South Florida in the 2003 Wildcat Classic.

Hughes is a senior outfielder for the softball team from Farmville, Va. Last season, she was selected the Louisiana Newcomer of the Year and was a second-team All-Louisiana honoree. She led the team and ranked third in the Southeastern Conference in stolen bases a year ago.

Dirks is a redshirt freshman pitcher for the defending SEC Champion baseball team. The left-hander did not pitch last season due to injury, but should contribute to the Tigers this season.

Spadoni, a sophomore on the Tiger football team from Kenner, was selected for his community service efforts. Earlier this month he spoke to children at Brookstown Elementary about the importance of staying in school and living a drug-free lifestyle as part of the school’s Character First Incentive Day.

These are six student-athletes that have gone the extra mile for the month. For their efforts, they will have their pictures displayed on the wall in the CCACSA.