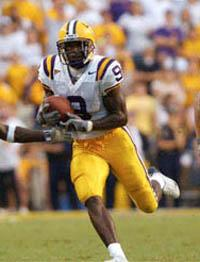 Devery Henderson is still asked about it nearly one year after the fact.

“It” is the “Bluegrass Miracle,” the 75-yard Marcus Randall-to-Henderson touchdown strike as time expired to lift LSU to victory over Kentucky. Ironically, the player responsible for one of the most remarkable moments in LSU football history would prefer not to bask in the limelight a legendary feat creates.

When the senior wide receiver from Opelousas, La., encounters fans and media, the final play of the Tigers’ 33-30 win last November in Lexington is usually the first topic of conversation.

“Once they ask me my name, that’s it,” Henderson said. “It’s enjoyable. But I don’t like too much attention. I’m kind of quiet and to myself.”

Perhaps the best part of the play’s aftermath was Henderson’s trip in July to Los Angeles for ESPN’s “ESPY” awards, which annually recognize the greatest achievements in sports. The “Bluegrass Miracle” was one of the nominees in the “Best Play” category. Henderson and his mother, Cheryl, attended Hollywood parties, mingled with sports and entertainment celebrities and enjoyed first-class hotel accommodations.

“I had a great time,” Henderson said. “I enjoyed myself. We met a lot of people, a lot of the nominees.”

The trip culminated with the announcement that the “Bluegrass Miracle” was the ESPY winner as “Best Play.”

Henderson humbly deflected attention from himself as he delivered his acceptance speech.

“I wish my teammates could be here to accept this award with me,” Henderson said from the stage of the Kodak Theater, “and my quarterback Marcus Randall who threw the pass, and everyone who supported me through it all. Thank you.”

Though Henderson’s name will forever be linked to the “Bluegrass Miracle,” his character is embodied more in his determination to overcome serious injury. Just two weeks after the Kentucky game, Henderson broke his left forearm against Ole Miss while making his eighth touchdown catch of the season. He underwent surgery the next day, as 14 screws and two metal plates were inserted into the arm.

Henderson missed LSU’s regular-season finale at Arkansas and the Cotton Bowl versus Texas, but he worked diligently to report to spring practice at full strength.

Henderson’s dedication was not lost on LSU coach Nick Saban.

“Devery was probably the most questionable guy going into spring practice and yet he went out there and made a tremendous amount of progress,” Saban said. “He showed a lot of toughness. There wasn’t one incident where I could see he worried about his arm. And he had a very serious injury. There were multiple breaks.”

Henderson, a running back in his first two seasons at LSU, continues to flourish at wide receiver. Through the first seven games of 2003, he is the Tigers’ second-leading receiver with 30 catches for 429 yards (14.3 yards per catch) and five touchdowns. Last season, his first as a wideout, he caught 23 passes for 447 yards and eight TDs, a team high. He is also a valuable weapon as a kickoff returner, with eight returns for 206 yards this season, including a critical 48-yard, fourth-quarter effort in the Tigers’ win last month over Georgia.

The 6-0, 190-pound Henderson said he has improved significantly since first making the transition from running back to wide receiver in the spring of 2002.

“It was all new to me then,” Henderson said. “I almost had no clue as to learning the plays, or what play to run. I feel a lot more comfortable now. Doing the little things can help you make big plays.”

Henderson now combines with Michael Clayton and Skyler Green to give LSU one of the most talented receiving corps in the nation.

“He’s a much, much better receiver than he was when he first started,” Saban said. “He always had great speed, always had great running ability. But it wasn’t natural for him to play receiver because he didn’t have a feel and instinct for playing the position. He’s really developed that.”

“Devery’s always had the potential,” quarterback Matt Mauck said. “I think he’s improved because he’s doing the little things like pressing the guy outside to go inside. That doesn’t sound like much, but it really makes a big difference, especially for a guy with that much speed.”

While Henderson provides the LSU offense with an outside deep threat, senior tight end Eric Edwards plays a less conspicuous, though no less critical, role. Edwards, named the second-best blocking tight end in the SEC by The Sporting News, relishes the versatility his position demands.

“Tight end is really tough; it’s a hard position,” Edwards explained. “It’s hard to learn the system; you’ve got to know all of the offensive line responsibilities and communicate with them, then you have to know the same routes the receivers have to learn. So, you have a dual role. But, it’s fun position to play, because you get down-and-dirty with the offensive linemen, then you can do the finesse stuff with the receivers.”

The 6-5, 264-pound Edwards is enjoying the best season of his LSU career, with 10 catches for 91 yards through the Tigers’ first seven games. He caught three passes for 41 yards in LSU’s 17-10 win last month over sixth-ranked Georgia, earning recognition as one of the Tigers’ Offensive Players of the Game both for his receiving and for his fierce blocking.

Edwards signed with LSU out of Ouachita Christian High School in Monroe, La., where he earned Parade All-America recognition as a senior, catching 36 passes for 720 yards and five touchdowns.

However, Edwards knew he had to become a more complete player in order to succeed in college.

“When I came here, I needed to improve a lot on my blocking skills, so I worked the hardest on that,” Edwards said. “Every year, I think I have improved. I’ve been fortunate to have great coaches here, and I’ve just tried to work hard at everything I do.”

Edwards was guided in his first two seasons by his older teammates, including Robert Royal, who now plays tight end for the NFL’s Washington Redskins.

“Rob was a great influence on me, along with (former LSU tight end) Joe Domingeaux,” Edwards said. “Rob brought me up, helped me and taught me the things I needed to know. Rob was a very good route-runner and receiver, and Joe was a great blocker. I watched them, and I was able to learn a lot from them.”

Edwards is one of four fifth-year seniors on the LSU squad who joined the program in 1999, one season before Saban became the Tigers’ coach. The others who endured a 4-7 campaign as redshirts in ’99 are offensive tackle Rodney Reed, defensive tackle Bryce Wyatt and punter Donnie Jones.

“When Coach Saban and his staff came in, they completely changed the program,” Edwards said. “We went to the Peach Bowl and won eight games that first year, and it’s continued from there. He’s a great coach, and he’s got a great staff.”

The notoriety LSU now commands is something Edwards envisioned growing up in Monroe, known as “Football Town” in Northeast Louisiana. Besides Baton Rouge and New Orleans, the Monroe-West Monroe area has produced the most players currently on the LSU roster (six).

“Football is real big up there; there are a lot of big high schools that are competitive,” Edwards explained. “LSU was definitely my school growing up, and it’s where I always wanted to be. LSU is real big in that part of the state.”

Just as Royal and Domingeaux did for their younger teammates, Edwards said the 2003 LSU seniors plan to cultivate a legacy for their successors.

“We hope to finish the season out on a great note, just keep winning and playing hard,” Edwards said. “We hope to leave the program in great shape for the younger guys.”