Volleyball Plays Host to No. 2 Hawai'i 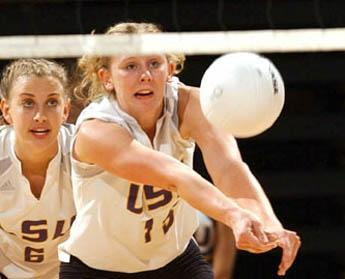 BATON ROUGE — Coming off a monumental win over South Carolina on the road last Sunday, the LSU volleyball team will take a break from Southeastern Conference play host to No. 2 Hawai’i in the Maravich Center on Friday at 7 p.m. for Louisiana Luau Night. The match will be broadcast live on Cox Sports Television, Baton Rouge cable channel 37.

Fans are encouraged to come out early for the match and enjoy music, inflatable games and a spacewalk from 5-7 p.m. Jambalaya will be served to the first 150 people. During the match, lucky fans will win a new Char-Broil grill, LSU tailgating chairs, a television and other great prizes in Limbo for Loot, Hula Hoop and other contests.

“This is a great opportunity for our team,” said LSU head coach Fran Flory. “We are playing two of the top three teams in the country in the next 2-3 weeks. We are coming off a solid win at South Carolina and with such a young team, we have everything to gain and nothing to lose out there.”

The Tigers enter the contest with a 9-12 overall record this season. LSU has won two of its last three matches and four of its last seven, with two of its three losses coming in close five-game matches on the road. The match against Hawai’i begins a four-match home stand that will close out the Tigers’ 2003 home schedule.

Second-ranked Hawai’i is currently 20-1 on the season with its only loss to No. 1 USC. The Rainbow Wahine take on Rice on Thursday night in Houston before traveling to Baton Rouge to face the Tigers on Friday. Hawai’i has won 19-straight matches, dropping just 10 total games this season, and has not lost to an unranked opponent since Sept. 12, 1997.

Two-time All-American Kim Willoughby returns to Louisiana with the Rainbow Wahine to face the Tigers. The Napoleonville, La., native currently leads the nation in kills per game with 6.65. Additionally, she ranks 13th nationally in hitting percentage at .402 and 17th in aces per game with 0.61.

“Hawai’i is a certainly a solid team,” said Flory. “It is great to have a player like Kim Willoughby back in Louisiana. It shows the young girls in this area what they can do if they strive for success. She is a great role model for them, but Hawai’i is not a one- woman show. They are a team that goes beyond just Kim Willoughby. They are outstanding all around and we will have to play against their entire team and not just one player.”

In two previous meetings with Hawai’i, the Tigers are 0-2, but have not faced the Rainbow Wahine since the 1984 season. With Hawai’i ranked No. 2 nationally, the match marks the highest ranked opponent LSU has faced since falling to second-ranked Florida at home on Oct. 27, 1996.

If the Tigers defeat the Rainbow Wahine, it would mark LSU’s first win over a top 5-ranked team. The Tigers have defeated top 10-ranked teams seven times in their history, the most recent in 1992, when LSU topped No. 9 New Mexico, 3-0, on the road. LSU’s best win over a ranked opponent was a come-from- ehind win over No. 7 Texas, 3-2, in the NCAA South Regional finals in Austin, Texas, in 1990, that sent the Tigers to their first Final Four.

The Tigers are currently 0-2 this season against nationally ranked opponents. LSU dropped a 3-0 decision to then No. 5 Nebraska at the Nokia Sugar Bowl Classic in New Orleans. The Cornhuskers have since dropped to No. 11 nationally.

The Tigers also fell 3-0 to then No. 12 Kansas State at the Wildcat Classic in Manhattan, Kan. Since that meeting, the Wildcats have improved to No. 8 in the nation. Against then unranked Colorado State in the same tournament, LSU took a game from the Rams, but could not get the win, falling to CSU, 3-1. The Rams have since moved into the poll and are currently ranked No. 18.

Another milestone will be on the line for LSU as Flory goes for win No. 200 of her career. Additionally, she will trying to pick up her 90th win at LSU. In her 13th season as a collegiate head coach, Flory has recorded 199 wins in stints as a head coach at Wittenburg University, Southeastern Louisiana, Kentucky and LSU. In six seasons at with the Tigers, she has compiled 89 wins and is currently the third-winningest head coach in LSU history, just six behind Gerry Owens.

The Tigers will return to SEC play on Sunday against Tennessee at 1:30 p.m. in the Maravich Center. Following the match, the LSU CHAMPS (Challenging Athletes Minds for Personal Success) program will be sponsoring the annual BOOzar on the upper concourse of the PMAC. Adults who bring a food donation to the volleyball match will be admitted for $3 and children in costume will be allowed admittance for $1 to kick off the CHAMPS Thanksgiving Food Drive.

The eighth annual BOO-Zar will take place from 3-5 p.m. and feature athletes from all of the Tiger athletic programs. Area families are invited to enjoy a safe afternoon of Halloween fun and trick-or-treating. Children are encouraged to wear costumes. Last year over 500 children and 100 student-athletes participated in the event.