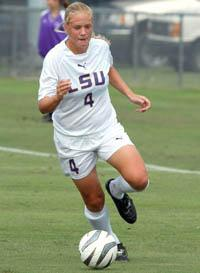 TUSCALOOSA, Ala. — The LSU soccer team will hit the road for a pair of critical Southeastern Conference matches this weekend, beginning the trip with a match versus the Alabama Crimson Tide on Friday in Tuscaloosa, Ala. at 7 p.m. at the Alabama Soccer Complex.

The Tigers (9-5-1, 2-4 SEC) have won two of their last three conference matches and are currently tied for third place in the Western division with Arkansas. LSU will face Arkansas on Oct. 31 in Fayetteville, Ark., in the Tigers’ final SEC match of the season.

“This is a big weekend for us because we are playing two teams in our division and we are fighting to try to get to the SEC Tournament and we are going on the road so we know it will be tough,” said LSU head coach George Fotopoulos.

LSU is coming off of a 3-0 loss to the Tennessee Lady Vols on Sunday, who are currently the top overall team in the SEC but did pick up their first win over Georgia in school history, posting a 4-1 win over the Bulldogs last Friday in Baton Rouge.

Junior forward Artie Brown enters the weekend with a team-leading 11 goals and is tied for the team lead in points with 24. Freshman Stacy Bishop has scored 10 goals and also has 24 points. Senior midfielder Stephanie Keating has tallied a team-high six assists and has scored five goals. The Vero Beach, Fla., native can tie teammate Rachel Cohen for the school’s all-time assist record (21) with just one more.

The Tigers rank second in the SEC in goals (42), goals per game average (2.80), and are third in points with 106. LSU has also taken the third-most shots in the league, with 245. LSU’s defense has also been stingy, shutting out five opponents and holding five other teams to just one goal.

Alabama (7-7-2, 0-4-2 SEC) have handled LSU fairly well since the team’s began playing each other in 1995, holding a commanding 6-1-1 edge, but the Tide have struggled this season and are in search of their first SEC win.

The Tigers will complete the road trip with a match versus Auburn on Oct. 26 at 2 p.m. in Auburn, Ala.