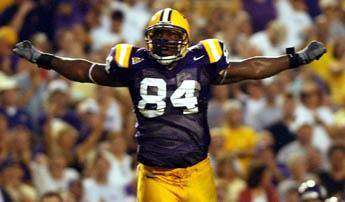 BATON ROUGE — LSU defensive end Marcus Spears was named one of the players of the week by the Louisiana Sports Writers Association on Monday. Also named was Louisiana Tech running back Ryan Moats.

Spears helped pace the Tiger defense in a 33-7 road win over South Carolina on Saturday. The Baton Rouge native recorded six tackles including four solo stops as LSU allowed zero rushing yards against the Gamecocks. Spears and the Tiger defense are now ranked No.1 nationally in scoring defense (9.9) and rushing defense (53.3).

Moats earned the offensive player of the week honor after rushing for 267 yards on 34 carries in the Bulldogs 44-41 loss to Hawaii on Saturday. The sophomore also caught five passes for 81 yards. The 267 rushing yards are the second most in Tech history. The Dallas native also scored two touchdowns on the day.

The Louisiana Sports Writers Association player of the week awards are voted on by a panel of voters across the state. The players are nomination by the sports information directors at the football playing institutions in Louisiana.

LSWA Players of the Week