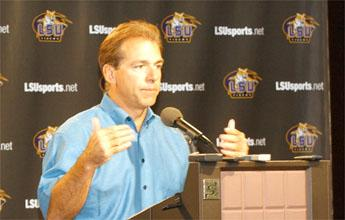 “In reviewing the game and summing up the last game, we were pleased with the sense of urgency that our players played with and the intensity that we had in the game and the way we were able to sustain that intensity. I think the physical toughness was good because we kind of dominated on both sides of the line of scrimmage. The young backs played well and the offensive line played well and I think we took a business-like approach to taking care of business. That is something that I think could really help us in the future to play with consistency. The one thing about identity that I always talk about that I think is important is playing smart and playing with intelligence. Even though we overcame our mistakes in the game very well, and I think that is a real positive, I still felt like we did not play smart at times. We got a couple of critical penalties and made a couple of major errors on defense that gave them big plays. Those are the things that we definitely need to improve on and work on for the future.”

“I think the most important thing for our players to learn from this experience is that when we bring our “A” game and we take care of business, so to speak, we can be a pretty decent football team and can beat about everybody or anybody that we play. When we don’t do things that way we can probably lose to just about anybody that we play. So, saying all that, it is important to bring your “A” game for who ever you play. This game and every other game that we play will have the same magnitude and the same importance relative to how our players need to approach it and what their emphasis should be on how we should try to play good football. It is about what we do and how we do it, and why it is important to do it that way and everybody believing in it. That is really what we need to focus on.”

“We are obviously playing a pretty good football team (Auburn) this week. They have won five-straight games and have run the football as well or better than anybody else in the country and they have two outstanding running backs- Cadillac Williams and Ronnie Brown. Jason Campbell has done a fantastic job this year of managing their offense, not making mistakes and doing the things that they need him to do to make them an effective offense. They have been very productive in their last five games on offense. Their defense is probably as good as any in the country. (Karlos) Dansby and (Dontarrious) Thomas are probably the best two linebackers that I have seen anywhere on any team for a while. They have an excellent overall defense and they do a good job up front, in the secondary, and they do not have a lot of weaknesses. They play excellent on special teams and have good specialists. This is a very good football team in a lot of ways. We are going to have to do what we do extremely well to have success against this team.”

“From an injury standpoint, Joseph Addai (sprained MCL – left knee) is probably out for this game. Nate Livings’ MRI came back and he did not have any damage to the ACL but he does have a pretty significant MCL injury. He also probably has some cartilage damage which will probably require a scope and we probably won’t know for sure how long he will be out until they do the scope but it is probably going to be in the 4-6 week range. It is actually good news that he does not have anything wrong with the ACL and we are hopeful that based on what the MRI says, he doesn’t, but when they scope him they can be a little more specific. I do not know the date that they are going to do that because I just got this information yesterday and Dr. Bankston reviewed it again today so this is pretty basic information. (Terrell) McGill twisted his ankle and will be out today, Devery (Henderson) has a hip pointer and will be out today but both of those guys should be okay for the game. We have several guys on our team are ill, sick with a virus or whatever. Anybody else that is not out there today is sick.

On Alley Broussard and Shyrone Carey’s injuries
“He (Alley) Broussard) was not on the injury report and Shyrone Carey will start practicing today in a red shirt but how he progresses during the week will determine whether he will play in the game or not.”

On the performance of the freshman running backs
“It did not surprise me at all in the game that they freshman players played as well as they did. Justin Vincent has played well every time he has gotten an opportunity to play this year. We knew the potential of the two first-year freshmen (Alley Broussard and Barrington Edwards) and we planned to use them both in the game. Alley played more than Barrington only because it was going well for him and he was giving us a dimension out there of running the ball north and south and being physical that nobody else really could give us. He was going well so we just kinda rode that horse a little bit. We had plays in the game that we wanted him to run and knew we were going to do it right off the bat and it did not surprise me that any of those guys played well. When  Shyrone Carey comes back he has a role in our offense and is a very good player and we will use him just like we used him before. These guys will complement each other and how they play.”