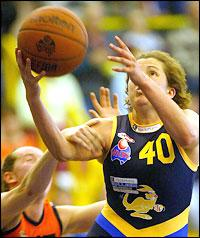 Despite the efforts of their warrior, Katrina Hibbert, Bulleen Boomers yesterday let slip a winnable Women’s National Basketball League game, enabling the Flames to return to Sydney with a 76-75 victory and resurrect their round after Friday’s loss to Dandenong Rangers.

“I hate losing,” Bulleen coach Cheryl Chambers said. So does forward Hibbert, who had 29 points and seven rebounds to go with strong leadership of a team still working out how to win.

“She’s just a legit basketballer; she’s WNBA (standard) I think,” Chambers said. “She can do a bit of everything, she’s fitter than she’s ever been, if there’s a ball to get she’ll get it, she can shoot (the three-pointer).”

When new centre Hollie Grima settles – yesterday she hit only 4-14 shots from inside the key – and Hibbert’s teammates gain confidence, the Boomers will push for a place in the four, as predicted pre-season by Flames coach Karen Dalton.

While pleased to return to Sydney with a 1-1 result, Dalton was frustrated by her team’s inconsistency – twice the Flames gave up 13-point leads before holding off Bulleen. Dalton praised Sapphire Brianna Hennessy, who had 18 points and was a strong complementary scorer to Shelley Hammonds (20) and Belinda Snell (16).

The Capitals were to play South Korean champion Hansae Seoul overnight in the consolation final (for fifth place).