Leaumont Leads Tigers to First Win at USC Since 1995 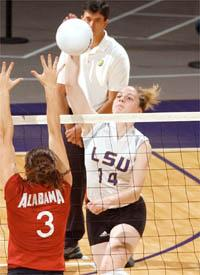 COLUMBIA, S.C. — Coming back from an 11-point deficit in the third game, the LSU volleyball team staged a dramatic comeback to on their way to defeating South Carolina, 18-30, 30-22, 30-26, 30-17, in the Volleyball Competition Facility on Sunday afternoon.

With the win, the Tigers improve to 9-12 overall and 4-5 in Southeastern Conference play, while South Carolina drops to 10-10 overall and 4-4 in league play. The victory snaps the Gamecocks’ nine-game winning streak over LSU, and marks LSU’s first win in Columbia, S.C., since 1995, evening the series at three each on Carolina’s home court.

“This is a huge win for us,” said LSU head coach Fran Flory. “This is my first win against South Carolina since I’ve been at LSU.

“I think the football team set the standard for us on Saturday night,” Flory continued. “Seeing them fight through in a hostile environment and come through in the clutch motivated us and gave us something to emulate. We learned a lot from being at the game and we just tried to come up with a big performance like they did.”

After dropping the first game, the Tigers took the second game to even the match. Coming out of the locker room, South Carolina took a 22-11 lead on LSU in the third game. The Tigers would not go away and battled back, outscoring the Gamecocks 19-3 over the remainder of the game for the win. In the fourth game, LSU used a steady attack to put South Carolina away and take the match.

Lauren Leaumont led a trio of Tigers with double-figure kill performances with 16, while also hitting at a .448 clip, followed by Regan Hood with 14 and Kassi Mikulik with 11. Hood led the Tigers with eight blocks, including five in the crucial fourth game.

Daniela Romero recorded a double-double for LSU with 48 assists and a team-best 10 digs, followed by Beth Cowley with nine digs. Mikulik, Romero and Cowley each recorded a pair of service aces for the Tigers.

“Lauren Leaumont was huge for us today,” said Flory. “She did a tremendous job not only offensively, but also with her ball control and her passing. Kassi (Mikulik) also did a great job handling the ball. Everyone did what they were supposed to do and we had a few people that stepped up for us and that is what a team needs to do in order to be successful.”

South Carolina came out and took a 4-1 lead in game one, extending that lead to 10-3 on a fast paced attack that the Tigers had trouble catching up with. South Carolina outkilled LSU, 21-13, while outhititng the Tigers .581 to .200, in taking the first game, 30-18.

LSU clearly found the rhythm in game two, taking the 4-1 lead, before extending it to 12-5. The Gamecocks came back to cut the Tiger lead to two, 15-13, before LSU took over. Leading 18-15, the Tigers went on a 9-4 run to take the seven-point advantage. With four service aces in the game, LSU closed out the second game, 30-22, with the second ace by Cowley. Mikulik took charge for the Tigers in the game with five kills and a pair of blocks and digs.

Much like the start of game one, South Carolina came out and took control early in game three. Strong serving kept the Tigers off balance as the Gamecocks took the 19-9 advantage.

With South Carolina leading 22-11, LSU came out of a timeout and promptly scored four straight points to cut the USC lead to seven. The Tigers clawed their way back into the game, using an 11-2 run to take their first lead since 1-0. Over the final 23 points of the game, LSU outscored South Carolina 19-3.

In the fourth game, LSU used a steady attack and strong serving to keep the Gamecocks off balance. The Tigers also capitalized on South Carolina’s mistakes to take the early 15-10 lead. From that point on, LSU dominated the game, going on a 15-7 run to close out the game and the match, 30-17.

The Tigers return home to take on No. 2-ranked Hawaii on Friday at 7 p.m. in the Maravich Center. LSU is 0-2 all-time against the Wahine, but have not played them since the 1984 season. The Tigers are currently 0-2 this season against nationally ranked teams, but both teams are now ranked in the top 10.