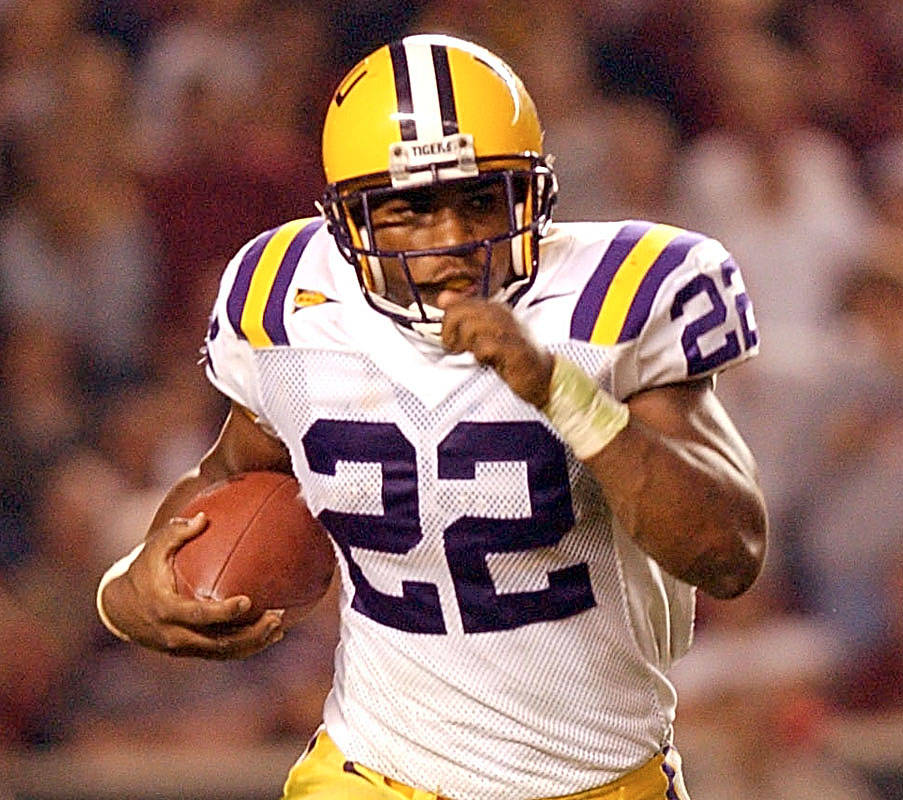 COLUMBIA, S.C. — No. 10 LSU responded to its first loss of the season by dominating the South Carolina Gamecocks on Saturday night in Williams-Brice Stadium, tallying 482 yards of total offense while holding the Gamecocks to zero yards rushing to win 33-7.

With its No. 1 and 2 running backs sidelined with MCL sprains, true freshmen running backs Alley Broussard and Justin Vincent carried the load both literally and figuratively for the Tigers.

Vincent, who has been a Tiger since January of 2003, started yet it was Broussard that was dominant. The Lafayette, La., native rushed 19 times for 108 yards and caught one pass out of the backfield in his first complete game as a Tiger.

Vincent, a prep superstar from Lake Charles’ Barbe High School, also had a stellar game in his first significant contribution in a game atmosphere. He ran 16 times for 77 yards and two 1-yard touchdowns, and added four catches for 46 yards.

LSU starting quarterback Matt Mauck regained the poise in the pocket that was lacking in a 19-7 loss one week ago, completing 24-of-30 passes for 199 yards and two touchdowns with an interception. He added 40 yards rushing on four carries and was not sacked.

The LSU defense also refused to back down from its elite status, holding South Carolina without a net yard rushing. The last time LSU held an opponent to zero or fewer yards was on Oct. 30, 1982, when the Tigers held the Rebels to minus-50 yards on the ground.

South Carolina quarterback Dondrail Pinkins accounted for all of the offensive output for the Gamecocks, completing 15-of-32 passes for 254 yards including a 77-yard touchdown.

With the exception of two missed extra-point opportunities, the Tigers could do little wrong in the first half.

The Tigers had two scoring drives of more than 90 yards, holding the ball for 19:47 in the half.

After winning the toss and deferring the decision to the second half, the Tigers stuffed South Carolina on its first possession to force the game’s first punt. Gamecock rugby-style punter Joey Bowers kicked a line drive that nearly hit a Tiger blocking downfield before having the ball downed at the LSU 36-yard line.

The Tigers began their first drive with consecutive passes from Mauck to Green for a total of 16 yards to break into Gamecock territory. Then, LSU showed off its running game, with five consecutive rushes for 52 yards including a 33-yard gain by Broussard on his first carry from scrimmage to the USC 7.

LSU was backed to the 5-yard line by a penalty for illegal substitution before Mauck found Henderson open in the back of the endzone for the 13th receiving touchdown of his career. The score put Henderson alone in 10th place on LSU’s list of career receiving touchdowns.

Placekicker Ryan Gaudet missed the point after attempt and LSU led 6-0 midway through the second quarter.

South Carolina earned its first three first downs on the ensuing drive, however, the Gamecocks were stopped just inside LSU territory and punted again. A 44-yard punt by traditional-style punter Josh Brown bounded sideways at the LSU 3-yard line and was downed there, beginning what was one of the longest drives in LSU history.

Starting from their 3-yard line, the Tigers ran the ball 12 times for 52 yards and completed 8-of-9 passes for 65 yards, completing the 21-play, 97-yard drive with a 4-yard touchdown pass from Mauck to tight end Eric Edwards in 9:37. Although longer drives (yardage wise) exist in school history, the number of plays and time of the drive will have to be researched before their place in school and NCAA history is known.

The drive included a 15-yard personal foul penalty on the Tigers for a late hit.

Another South Carolina punt led to the Tigers’ second-consecutive 90-plus yard drive for a touchdown.

Starting from its 9-yard line, LSU took the ball 91 yards in 14 plays to push the lead to 19-0 near the end of the first half. Broussard and Vincent continued to dominate on the ground, amassing 80 yards rushing 10 carried including a 1-yard touchdown run by Vincent. Mauck’s two-point rushing attempt failed with 55 seconds to play in the half.

South Carolina opened the second half by forcing LSU to punt, setting up the Gamecocks’ first and only score of the evening. Pinkins rolled to the left and found Matthew Thomas open on a blown coverage for a 77-yard touchdown down the left sideline.

The lead was cut the 19-7 after the extra point.

Just as it seemed like the LSU offense began to run out of gas somewhat, Pinkins was hit by LSU linebacker Kirston Pittman in the backfield, jarring the ball loose some 12 yards behind the line of scrimmage. Linebacker Jason LeDoux picked up the ball at the USC 15-yard line and ran it back for a touchdown.

The extra point was successful by Gaudet and LSU led 26-7 with 1:27 to play in the third quarter.

The Tigers tacked on a final touchdown with just under seven minutes remaining in the game, as Vincent ran in from 1-yard out for his second touchdown of the game.

LSU returns to action on Saturday, Oct. 25, when they entertain Auburn in Tiger Stadium for a 6:45 p.m. CDT contest to be televised nationally by ESPN.