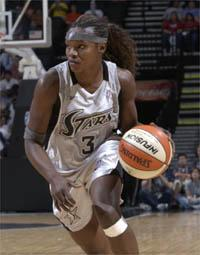 The Americans will play for the title Sunday against SGAU Samara, which upset European champion UMMC Yekaterinburg 75-67 in an all-Russian semifinal.   Cheryl Ford added 11 points and eight rebounds for the WNBA squad, which is coached by Michael Cooper.

“They made a successful job in the last seconds. They were sharp,” Cooper said.

In the second semifinal, Maria Stepanova had 15 points and 12 rebounds for Samara. Sheryl Swoops had 20 points and five rebounds while Natalie Williams added 11 points and 8 rebounds for UMMC, which featured four WNBA players.

On Sunday, UMMC, which defeated the WNBA team 68-54 on Thursday, will play Olympic for third place.