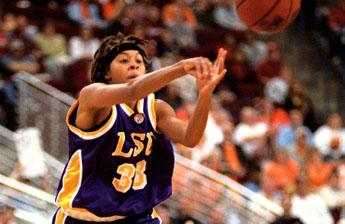 BATON ROUGE — The LSU men’s and women’s basketball team both took their turns on the floor of the Maravich Assembly Center Saturday on the first day allowed to practice for the 2003-04 season.

The LSU men practice twice on the day for a combined total of almost four hours, while the women worked out for approximately three hours between the two men’s workouts.

The Tigers were are full strength for both practices with the exception of freshman Ross Neltner, Mr. Basketball in the state of Kentucky, who suffered in injury to his left MCL and is listed by trainer Drew Shea as day-to-day.

“I thought it was a good first day considering we’ve got five players who’ve never been exposed to this type of practice before. They were receptive to the teaching. They picked it up pretty well. I was pleased with what we did,” said LSU Coach John Brady. “Our think our players did well for the first day. The next two or three workouts will be a lot about technique, footwork, a lot of exact teaching without the ball being involved. The more they do it, the better they’ll get at it. It will become second nature for them and help them progress as players.”

On his freshmen, Brady said, “We’re progressing and they’ll get better every day as long as they just stay with it. I told them before the practice that some of the freshmen will have good days, some will have bad days and some will be frustrated. But their ability to bounce back, come back the next day and try to do better and retain some of the learning is important.”

The women’s roster all dressed out for the practice with both Crystal White and Wendlyn Jones seeing limited action as they continue to work their way back in to the full rotation after off-season injuries. LSU Coach Sue Gunter was very happy with the things she saw in the course of the workout.

“I was very pleased,” said Gunter, who is entering her 22nd season at LSU. “I loved the way we looked. I thought we saw excellent evidence of the work we did in our four-player workouts (in the preseason). Our perimeter people looked strong, our inside looks good. The freshmen have a way to go, but they are going to contribute for us. We won’t cancel any practices because we still have a ways to go, but for the first day it was a good day.”

Season tickets for both the men’s and women’s basketball season remain on sale at the LSU Athletic Ticket Office or on the Internet at www.LSUsports.net. The women open their exhibition season on Nov. 5, while the men will play their first of two exhibition games on Nov. 6.