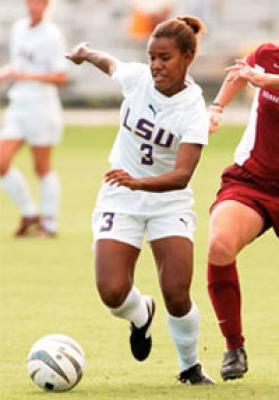 BATON ROUGE — The LSU soccer team will look to complete a historic weekend at home as the Tigers welcome the Tennessee Lady Volunteers to the LSU Soccer Complex on Sunday for a 2 p.m. match.

The Tigers (9-4-1, 2-3 Southeastern Conference) defeated Georgia on Friday night for the first time in school history, winning by a score of 4-1 as senior midfielder Stephanie Keating scored two goals and junior forward Artie Brown recorded her team-leading 11th goal of the season.

“This is a big match for us because we came up with a big win on Friday night and we would like to keep the momentum that we have and get back to even in the SEC,” said LSU head coach George Fotopoulos.

LSU has out-scored the opposition 42-15 this season and have won two-straight conference matches for the first time since beating both Ole Miss and Mississippi State last season. The Tigers have moved into a tie for third place with Arkansas in the Western Division after the Lady Razorbacks’ 4-0 loss to Tennessee on Friday in Fayetteville, Ark.

Tennessee, the 2002 SEC Tournament champions, enter Sunday’s match with a 10-4 overall mark and are 4-1-0 in the SEC. LSU has never defeated Tennessee in school history, going 0-4. The Lady Vols won the last meeting between the teams, by a score of 3-1 during the 2001 season in Knoxville, Tenn.

Sunday’s match is designated as another “Soccer Mom Sunday” in which moms can qualify for the chance to win an SUV or mini van to be given away at the end of the season. Sunday is also “Club Soccer Day II. Tickets are available for only $1 for all club soccer teams.