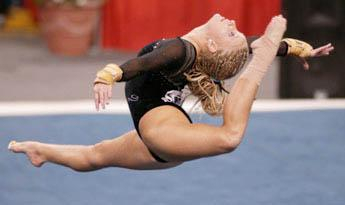 BATON ROUGE — Never one to dodge the tough competition, head LSU gymnastics coach D-D Breaux and her Tiger squad will be tested from beginning to end during the 2004 season as six of the teams on the Tigers’ slate rank among last year’s top 25, announced Breaux Saturday upon releasing the 2004 schedule.

“This is a get ready quick schedule,” said Breaux. “We start with a quad meet at Michigan State and then jump right into the fire with a meets against Florida and Alabama.

“Even with the tough competition up front, I like this schedule,” added Breaux. “It has a good rhythm with plenty of ups and downs. I think it lends itself to the team peaking at the right time.”

LSU will be in the national spotlight throughout the year as its Feb. 13 meet at Georgia is scheduled to air nationally in tape-delay on ESPN2, while its home meet versus Auburn, Feb. 27, will be broadcast regionally on a tape-delay basis by FOX Sports Net. In addition, FOX Sports Net will also carry the SEC Championships from Duluth, Ga., on a tape delay basis.

The Tigers open the 2004 campaign with a two-week road swing that includes a quad meet at Michigan State on Jan. 9 and the SEC conference opener at No. 7 Florida, Jan. 16.

LSU will then return to Baton Rouge to open the home schedule with national runner-up and defending SEC champion Alabama on Jan. 23. The Tigers continue the home stand Jan. 30 with a tri-meet featuring in-state rival Centenary and USAG defending national champion Texas Woman’s.

Feb. 6 takes the Tigers back out on the road as they travel to Fayetteville, Ark. for the first time in school history to meet up with second-year team Arkansas. LSU then takes on the Gym Dogs of Georgia in Athens the following week.

LSU will then take a break from conference action to meet up with Texas Woman’s and Arizona, both for the second time of the season, in Denton, Texas, Feb. 23.

The always challenging SEC Championships will be next on the Tigers’ slate. After a three-year stint in Birmingham, Ala., the March 20 competition will be held at the Gwinnett Civic and Cultural Center in Duluth, Ga., for the first time in conference history.

Postseason action will continue for the Tigers in the friendly confines of the Pete Maravich Assembly Center on April 2, as LSU plays host to the NCAA Central Regional Championships for the second time in three years.

“Hosting the regional championships is a huge advantage for us,” said Breaux. “Not only do we get to compete in our own venue, but we get to do it in front of our fans.”

The 2004 gymnastics season will then come to a conclusion, April 15-17, at the NCAA Championships. The meet will be hosted by the defending national champions, UCLA, at the Pauley Pavilion in Los Angeles, Calif.