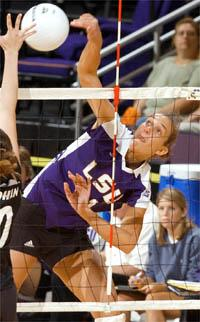 The Tigers (8-12, 3-5 SEC) are coming off a tough five-game loss at Kentucky on Friday, while South Carolina (10-9, 4-3 SEC) dropped a three-game match to Arkansas on Friday night at home.

“We will need to play better and take advantage of all of our opportunities against South Carolina,” said LSU head coach Fran Flory. “Even though USC is a young team, they are very athletic, one of the most athletic teams we will face all year, and we can’t afford to make mistakes like we did the last time we played them.”

LSU dropped a three-game match to the Gamecocks last month in Baton Rouge. Regan Hood led the team with 16 kills and 12 digs, while also recording a pair of blocks. Lauren Leaumont also had 10 kills with a team-best four blocks.

South Carolina recorded 13 blocks for the match, including seven in game one, compared to just eight for LSU. Those 13 blocks contributed to the 33 attacking errors committed by the Tigers on their way to hitting just .101 for the match, compared to.213 for the Gamecocks.

For South Carolina, Lynae Vanden Hull led the effort with 17 kills, as Niece Curry had a match-best six blocks. Nicole Miller led the match with 17 digs and Iris Santos had a pair of service aces for the Gamecocks.

Hood leads the Tigers and the league with 4.50 kills per game on the year. In addition, she leads the team in block solos and ranks second in total blocks and service aces. Megan Heinz is the team leader in blocks per game and attacking percentage, while Rachel Pittman leads the team in digs per game.

The Tigers are 6-11 all-time against South Carolina, including a 2-3 record in Columbia. LSU will be looking to snap a nine-match winning streak for USC dating back to 1996.

The Tigers return home to take on No. 2 Hawaii on Friday at 7 p.m. in the Maravich Center. LSU will be taking on its third nationally ranked opponent of the season. The Tigers are 0-2 this season against ranked opponents, both of which are now ranked in the top 10.