Tigers Look to Get Back on Track at South Carolina 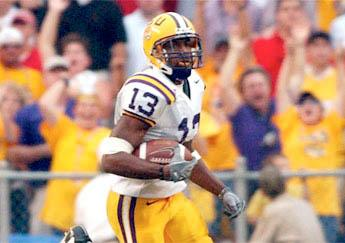 COLUMBIA, S.C. — The LSU football team will look to rebound from last week’s loss to Florida as the 10th-ranked Tigers travel to face the South Carolina Gamecocks in a pivotal Southeastern Conference matchup at 6:45 p.m. in a game televised nationally by ESPN2.

The Tigers, 5-1 overall and 2-1 in the SEC, enter Saturday’s contest coming off of its first loss of the season, a 19-7 setback to Florida last weekend in Tiger Stadium. South Carolina, 4-2 overall and 1-2 in league play, defeated Kentucky 27-21 last Thursday in Columbia.

The Gamecocks are 4-0 at Williams-Brice Stadium in 2003 and feature arguably the top freshman in the SEC in running back Demetris Summers. The Lexington, S.C. native is fifth in the conference in rushing with 453 yards on 80 carries and three touchdowns and sixth among all freshmen in Division I-A in rushing yards per game (75.5).

“I know it’s going to be a tough game on the road because South Carolina is a tough place to play,” LSU head coach Nick Saban said. “They have some good football players and are playing very well on defense. Demetris Summers is an outstanding running back, and he has made a lot of people miss. He has made some big play runs for them this year.”

LSU may be without the services of its two top running backs. Joseph Addai and Shyrone Carey are listed as very questionable after both players suffered medial collateral ligament injuries in the Florida (Addai) and Mississippi State (Carey) contests. If neither is able to go the Tigers will look to three very talent freshmen to fill the void. Justin Vincent is the most experienced of the group with 132 yards and one TD on 30 carries. Barrington Edwards has 47 yards rushing on 11 attempts, while Alley Broussard has eight yards on 11 carries and one TD.

Quarterback Matt Mauck will look to carry the load on offense. The junior from Jasper, Ind. has completed 91 of 152 passes for 1,190 yards and 10 TDs. Michael Clayton leads all receivers with 33 receptions for 537 yards and four TDs, while Devery Henderson is not far behind having caught 27 passes for 411 yards and four scores. Clayton needs one TD reception to move into a tie for fifth-place with Tony Moss on LSU’s career receiving touchdowns list.

Defensively, junior linebacker Lionel Turner leads the Tigers with 34 total tackles (24 solos). Corey Webster rates second in the league in interceptions with three. The cornerback is just one interception shy from moving into a tie for fourth-place on LSU’s career interceptions list.

The Gamecocks and Tigers will meet for only the 17th time in each program’s storied history. LSU leads the series 13-2-1, including a come-from-behind 38-14 victory in Tiger Stadium last year. In 1995, LSU’s last visit to Columbia, both teams battled to a 20-20 tie.

South Carolina is coached by Lou Holtz, a name all to familiar to the college football scene and LSU head coach Nick Saban expects the Gamecocks to be at their very best.

“Lou (Holtz) always has a trick or two for you,” Saban said. “He always has something up his sleeve, and a lot of time you see it in special teams I think it is a time when you really need to be sound and solid in what you’re trying to do on all those things. We have to play on the road and it is a tough place to play. Our players are going to have to be in the right frame of mind.”