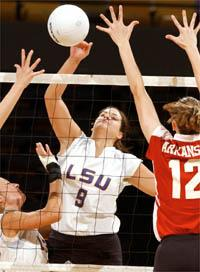 With the loss, the Tigers fell to 8-12 overall and 3-5 in Southeastern Conference play. Kentucky improved to 11-8 overall and 3-4 in league play. The pair split the two-game series for the season, with each team winning their home match in five games.

“I am really disappointed in the way we finished today,” said LSU head coach Fran Flory. “I thought we put ourselves in a good position to win the match and then let Kentucky come back on us. We need to learn to play ahead and finish a match.”

LSU took game one of the match and then fought off three game points in the second game before winning it and taking the 2-0 lead to the locker room. Kentucky came back to take games three and four with late rallies. In game five, a 9-1 run by the Wildcats to start was insurmountable for the Tigers, who dropped their second-straight five-game match.

With 11 kills and a team-high 15 digs, freshman Lauren Leaumont recorded her sixth double-double of the season. The New Orleans native also recorded a team-best three service aces. Daniela Romero led the team with 57 assists, one shy of the individual best this season, while Hood led the team with three blocks.

LSU jumped out to an early 4-1 lead in the second game. Kentucky came back to tie the game at nine. The game would be tied 11 more times before the Wildcats took the lead, 25-24. UK would send it to game point, 29-26, before the Tigers rallied back with three straight points to tie the game at 29-29.

LSU would win the next point on an ace by Leaumont, but UK came back to tie  it on an attacking error by the Tigers. A service error by the Wildcats gave LSU it’s second game point and the Tigers took advantage, winning the game, 32-30, on a kill by Constant, one of 10 she recorded in the game.

Kentucky jumped out early in game three, 4-1, and LSU would not overcome the slow start. The Wildcats led by as many as eight, 20-12, but the Tigers would not go away, battling back to cut the UK lead to four on three occasions. LSU fought off a pair of game points before the Wildcats avoided the sweep with a 30-25 win.

The Tigers took advantage of Kentucky mistakes to take an early lead, 6-3, before the Wildcats came back to tie the game at 10. With the score tied at 19, Kentucky would take the lead for good. The Wildcats led by as many as four, 26-22, before the Tigers fought back to cut the UK lead to one, 26-25, and again at 28-27. Kentucky would then close out the game at 30-27 with back-to-back kills and even the match at two games each.

In the decisive fifth game, the Wildcats jumped out to a 9-1 lead to start the game. LSU fought back to cut the UK lead to four, 12-8, but could get no closer. Kentucky went on to close out the game and the match, 15-10.

The Tigers now travel to Columbia, S.C. to take on the South Carolina Gamecocks. LSU dropped a 3-0 decision to South Carolina in Baton Rouge earlier this season and will be looking to snap a nine-match losing streak to the Gamecocks.