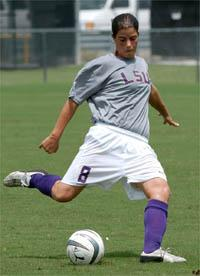 BATON ROUGE — The LSU soccer team defeated the Georgia Bulldogs 4-1 on Friday night at the LSU Soccer Complex in front of the largest paid crowd in stadium history, as the Tigers earned their first win in school history against Georgia.

“This is the first time all year that we have played defense and offense the entire game and we executed our chances,” said LSU head coach George Fotopoulos. “I knew we were going to have two score at least three goals to win this game. Georgia missed a couple of chances that I thought could have gotten them back in the game and those were momentum shifts.”

The Tigers (9-4-1, 2-3 Southeastern Conference) won their second-straight SEC match and improved to 1-4 all-time against Georgia. The Bulldogs fell to 9-6 overall and 2-3 in the SEC. LSU scored its most goals in a game since the Tigers also recorded four in a 4-0 blanking of Louisiana-Lafayette on Sept. 19. LSU has now outscored the opposition 42-14 this season. The announced paid crowd of 778 on “Cram the Complex” night is the largest in LSU Soccer Complex history.

Senior midfielder Stephanie Keating scored two goals, her fourth and fifth of the season, to give the Tigers an early lead in the match which they would never relinquish. Keating, a Vero Beach, Fla., native, struck first at the 30:10 mark in the first half on an assist from Kate Ripple. Keating fired the ball beautifully from roughly 20 yards out near the sideline and the ball made it through a strong wind into the back corner of the net for a 1-0 Tiger lead.

Keating scored for a second time with 23:46 remaining in the half on the assist from freshman Stacy Bishop. Georgia cut he lead in half at the 21:01 mark as midfielder Andrea Velasco scored an unassisted goal.

Sophomore Christine Haman put the Tigers up 3-1 with her second goal of the year with the assist credited to Danielle Keath. Junior Artie Brown capped the scoring with her team-leading 11th goal of the season in the 74th minute.

Georgia out-shot LSU 16-14 but the Tigers had nine shots on goal to the Bulldogs’ four. LSU goalkeeper Robyn DesOrmeaux had three saves and the Tiger defense held the SEC’s leading goal scorer Jessica Winton without a goal.

“To be quite honest I was very impressed with the effort of players such as Stephanie Keating and Christine Haman coming off of the bench and getting that third goal for us, that was critical and was really the turning point,” said Fotopoulos. “Artie (Brown) was great too, but as much as I can talk about the front line, I have to talk about the defense. We shut down the leading goal scorer in the conference, Jessica Winton, and that was important for us because she is a great player, along with Tricia McKee. We knew we were going to have to come up with a good defensive scheme to shut her (Winton) down and we did. I am very pleased with the team.”

The Tigers will face defending SEC Tournament champion Tennessee on Sunday at 2 p.m. while Georgia will travel to Arkansas.