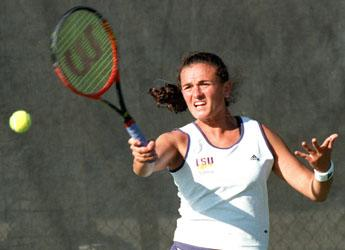 FORT WORTH, Texas — The Lady Tigers’ tennis team begins competition Friday against the top teams in Louisiana, Arkansas and Texas in the ITA Southwest Regional Championships at the Bayard H. Friedman Tennis Center.

Six Lady Tigers will compete this weekend, including the 38th-ranked doubles team of Lauren Seaman and Rocio Fantilli. Seaman and Fantilli returned last weekend from the Riviera/ITA All-American Championships, where they were eliminated by the No. 8 team in the nation. Before that, they lost to Aleke Tsoubanos and Kelly Schmandt of Vanderbilt, who went on to win the tournament title.

This weekend is a chance for the duo to redeem themselves, said LSU assistant coach Sandy Sureephong. “They’re more excited this week since they didn’t win last week.”

Fantilli will compete in singles for the first time this season. Fantilli, a senior, was ranked 99th in ITA’s fall preseason poll.

The only Lady Tiger not making the trip is Amanda Mang. Mang, who has the flu, won the A-Flight singles two weeks ago at the University of Indiana’s Hoosier Classic Invitational.

The four-day tournament begins Friday at 8:30 a.m. with 64 doubles teams in the main draw. Singles, with 128 players, begins at noon.

Brackets will be posted Thursday night at TennisInformation.com.<- ont=””>