Soccer Hopes to 'Cram the Complex' Against Georgia 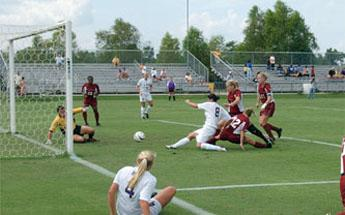 BATON ROUGE — The LSU soccer team will face the Georgia Bulldogs on Friday at 7 p.m. at the LSU Soccer Complex in a match being dubbed “Cram the Complex” by the LSU Marketing and Promotions Department.

The Tigers (8-4-1, 1-3 Southeastern Conference) and Bulldogs (9-5-0, 2-2-0 SEC) will likely play in front of one of the season’s largest crowds as tickets are available for only $2 and all LSU students, faculty and staff will get in free with an LSU ID. LSU picked up its first SEC win of the season last Sunday at home, defeating division-rival Mississippi State 2-1. Georgia lost to Florida 2-1 on Sunday.

LSU and Georgia have not met since the 2001 season when the Bulldogs recorded a 5-0 win in Athens, Ga. Georgia holds a 4-0 advantage in the all-time series. The Tigers enter Friday’s contest as one of the top offensive teams in the SEC as they rank second in goals, third in points, and second in goals per game, a category in which the Tigers also rank 12th in the nation at 2.92 per game. LSU has outscored the opposition 38-14 this season and have recorded five shutouts.

“This is going to be a tough match for our team because Georgia is a good team and is very well-coached and have done well so far this season,” said LSU head coach George Fotpoulos. “We picked up a win last Sunday and would like to get on a winning streak and that must start tonight.”

Freshman forward Stacy Bishop and junior Artie Brown are tied for the team lead in goals with 10 apiece. Brown has tallied 23 goals in her career to rank third all-time in school history. Senior midfielder Stephanie Keating leads the squad in assists with six and needs just one more to tie teammate Rachel Cohen for the most in school history with 21.

“Cram the Complex” will feature several games and contests for prizes such as a Home Theater System with a Flat Screen TV, digital cameras, an a Charbroil BBQ grill. There will also be competitions such as A Punt, Pass and Kick competition will be held as well as a “Longest Kick” competition where fans guess how long a certain kick is as well as a kid’s race for prizes.

The Tigers will remain at home to face the defending SEC Tournament champion Tennessee Lady Volunteers on Sunday at 2 p.m. Sunday is designated as “Club Soccer Day” with $1 admission for all club soccer teams and it will also be another “Soccer Mom Sunday” in which all moms can qualify for the chance to win an SUV or mini van to be given away at the end of the season.