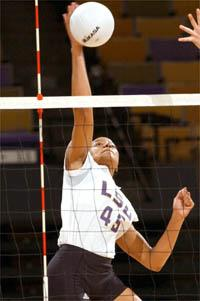 BATON ROUGE — Having won three of their last five matches, the LSU volleyball team remains on the road this weekend for a rematch with Kentucky in Memorial Coliseum on Friday at 7 p.m. ET.

“This is an important match for us,” said LSU head coach Fran Flory. “We need to go in and be very aggressive and single-minded in our focus. Our conference and our division are in a state of free-for-all right now and the opportunity exists for us to grab that second spot in our division and we need to take it.

“This will be a hostile environment because we will be playing in front of Kentucky’s Midnight Madness crowd. I think it will be a great situation for our young players and we will just have to see how they weather the conditions.”

This is the second meeting between LSU and Kentucky this season. The Tigers won the first match, 3-2, in Baton Rouge in September. LSU rallied back after losing the first game to win the next two games, holding off a fierce Wildcat rally in game three. Kentucky won game four to send the match to the decisive fifth game. In that game, the Tigers took the early lead and cruised on to the win.

Freshman Markeisha Constant had a career day for the Tigers in the first match against the Wildcats. The Tuscaloosa, Ala., native recorded a career-best 18 kills, tied for the team best, while knocking down a career-high six blocks. Junior Regan Hood had 18 kills, a career-high 19 digs and a match-high seven blocks, while freshman Lauren Leaumont also hit in double figures, recording 14 kills, with nine digs.

For Kentucky, Melissa Popp led the Wildcats and the match with 19 kills, while Sarah Spinner had 14 and Danielle Wallace recorded 10. Jennifer Casper led four Kentucky players in double figures with 19 digs. Both Sissy Canfield and Leigh Marcum had a team-best six blocks for the Wildcats.

LSU is now 16-21 all-time against Kentucky, including a 5-8 record in Lexington. The Tigers have won three of the last five meetings against the Wildcats, but have not won in Lexington since 1999.

This season for LSU, Hood leads the SEC in kills per game at 4.59. She also ranks second in kills per game and seventh in blocks per game in SEC matches. With 326 kills this year, the junior from Carrollton, Texas, is just 74 kills away from becoming the 30th player in LSU history to record 400 kills in a season and 174 kills from becoming the 12th player to record 500 kills in a season.

Following the match against Kentucky, LSU will travel to South Carolina for a rematch with the Gamecocks. The Tigers dropped a 3-0 decision to South Carolina in Baton Rouge in September. Before a 3-1 loss to Tennessee on Friday, South Carolina had won three straight matches and six of its last seven.