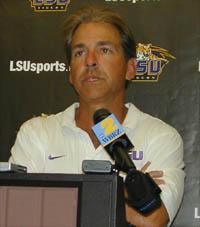 BATON ROUGE — LSU coach Nick Saban has used practice this week as a way of getting his players re-focused on what they have to do to be successful on the football field. So far, after three days of practice since the Florida defeat, it’s worked.

“The players have responded very well and we’ve had a good week of practice,” Saban told the media following Wednesday’s workout. “We want the players to focus on the next play and what they have to do on that play. We don’ want them to worry about what happened on the previous play.

“I think our frustration and anxiety when things don’t go well goes way up, then too many people press, and we start making mistakes and errors. That should not be our mindset, and it should not be the way we go about things.”

The 10th-ranked Tigers return to action on Saturday when they travel to face South Carolina at 6:45 p.m. CDT in Columbia. LSU enters the contest with a 5-1 overall mark and a 2-1 league record. The Gamecocks are 4-2 overall and 1-2 in league play. All four of South Carolina’s wins have come at home. The game will be televised to a national audience by ESPN2.

“I know it’s going to be a tough game on the road because South Carolina is a tough place to play,” Saban said. “They have some good football players and are playing very well on defense. We certainly need to improve the consistency that we are playing with on offense and I think it is really important to learn to focus on the next play.”

Offensively, the Tigers will continue count on the play of quarterback Matt Mauck along with receivers Michael Clayton and Devery Henderson. Through six games, Mauck has completed 91 of 152 passes for 1,190 yards and 10 touchdowns. Clayton has caught 33 passes for 537 yards and four TDs, while Henderson has 27 catches for 411 yards and four scores.

The Tigers enter the contest with its top two running backs still in doubt for the game. Joseph Addai and Shyrone Carey have both sat out practice this week and are very questionable for the South Carolina game. Addai injured the medial collateral ligament in his left knee against Florida, while Carey suffered the same injury against Mississippi State.

Saban said Carey felt a lot better on Wednesday and that he did some running at practice. Saban added that Addai is “making progress”.

If Carey and Addai can’t go on Saturday, the Tigers will look to a trio of true freshmen running backs to carry the load. Justin Vincent is the most experienced of LSU’s freshman running backs with 132 yards and one TD on 30 carries. Barrington Edwards has 47 yards rushing on 11 attempts, while Alley Broussard has eight yards on 11 carries.

The Tigers will practice again on Thursday and will then hold a walk-thru in Tiger Stadium on Friday afternoon before departing for Columbia.

Archived audio from coach Nick Saban’s weekly meeting with the media after practice Wednesday is now available to members on LSUsports.tv.