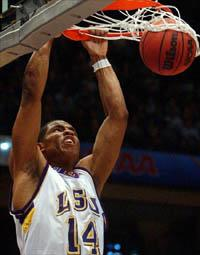 BATON ROUGE — LSU senior forward Jaime Lloreda was named Wednesday as one of 21 players on the CollegeInsider.com preseason All-America team as chosen by the web site in consultation with Division I head coaches and assistants.

CollegeInsider.com did not pick the players by team, just a listing of one pre-season team. Lloreda was one of seven seniors chosen for the group. The native of Panama averaged 12.3 points and 9.0 rebounds (second in the Southeastern Conference) a year ago, while hitting 56.3 percent of his field goal attempts.

Lloreda was a National Association of Basketball Coaches All-District 8 Second team choice a year ago and second team on the Louisiana Sports Writers Association All-Louisiana team, while being chosen as the LSWA Newcomer of the Year. Lloreda was in his first year at LSU after earning national junior college player of the year honors at Dixie State (Utah) College while leading his team to the national junior college title.