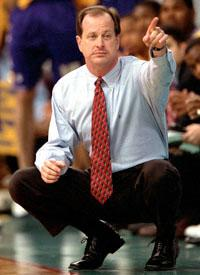 On the success of last year’s team…
“What I was proud about last year’s team was that we will able to turn it, in the middle of the year in the toughest conference in America. We had some leadership on that team, some experience. They didn’t get rattled and stayed the course and believed. We beat three teams who were No. 1 at some time last year – Arizona, Florida and Alabama. We were 18-1 when we shot 45 percent or better from the floor. We defended pretty well, mostly the last half of the year. The seniors that we lost – Torris Bright, Ronald Dupree, Brad Bridgewater, Collis Temple – those guys won 81 games in four years, the second most victories in the SEC West. Nobody in the league had to persevere through things like we went through. For them to put up those kinds of numbers, we are going to miss those guys. Not only that, Torris Bright is about 16 hours short of graduation. Brad Bridgewater is in the masters program and has a degree from LSU. Ronald Dupree is 11 hours short of an electrical engineering major and has made the Detroit Pistons roster. Collis Temple was in the PhD program while he was here. That is pretty significant stuff for a program that was equal to their opponents for only one year.”

On the returning players…
“We have a good core of players returning that did some significant things for us last year. Also, we have had an excellent recruiting class. I think people now see what this program is going to become. I feel good about what we have done on the floor and off the floor. Xavier Whipple is back. We put Xavier at the point last year, and it made a significant change in the ball going in the basket. We happened to win some games down the stretch with Xavier running the point. Darrel Mitchell had a significant freshman year. He had some outstanding games. I think he is going to be a really fine player. He works as hard as anyone I have ever coached. He is diligent, consistent and doesn’t say much and takes care of his business both on and off the floor. Guys who do that tend to eliminate distractions and move up. Antonio Hudson had some distractions in his sophomore year and maybe lost some of his confidence a little bit. He has rededicated himself since the spring and has had an excellent summer. He has had an outstanding preseason. I have a sneaking hunch he is going to return to his freshman year form. Tim Bush will be there again this year. He is a midsize guy in terms of being a power forward and perimeter player. Tony Gipson is back on our team after an academic problem. Tony is a good basketball player. He is extremely quick and explosive. Our players have been talking about how well he has played this summer. He gives us another weapon and some more depth. I think if you took a vote in the league of all the coaches, at least nine of them would say Jaime Lloreda is the best low-post player in the SEC right now, based on what he did last year. Since he has been back in September during individual workouts, he has convinced me about how hard he has worked and the determination he has in being the best player he can possibly be.”

On the newcomers…
“Three of the five newcomers are in the top 25 in America out of high school and two of the five are top 10. Darnell Lazare won back-to-back state championships in high school. He was probably coached by as fine a high school basketball coach I know in Kenny Almond. He has been disciplined and yelled out. He understands what winning is and understands how to defend. He doesn’t come in here thinking about just scoring all the time. He knows what it takes to win and be on a winning program, plus he is 6-8, jumps over the rim and runs well. I think he is going to be along the lines of those seniors who just departed this program, four-year guys who are very good basketball players. Ross Neltner was Mr. Kentucky basketball. He is probably as fundamental a guy we have had. He is 6-8 on his way to 6-9 and gained 13 pounds since this summer. I anticipate him being another player along the lines of Collis Temple and Torris Bright. Last summer, Coach Pierre and I saw all the high school point guards in the country. Tack Minor was as good as any point guard in America. He handles the media well and loves life. He is intelligent (scored a 1280 on his SAT), emotional and competitive. Regis Koundjia and Brandon Bass were Parade All-Americans. The only Parade All-American we have signed since we have been here was Stromile Swift. Regis Koundjia is 6-7, almost 6-8 with long arms. He is extremely athletic. Right now, he is not as physical as he is going to get. Brandon Bass is as hard a working young freshman I have ever coached. He doesn’t miss appointments, doesn’t miss assignments. He is in class everyday, doesn’t miss tutor appointments. He was named Student Athlete of the Month by the Academic Center in his first two months at LSU, September and October. He hasn’t missed a 6 a.m. workout. As soon as he is through with class, he is in the office watching tapes of himself, wanting to get better. He is a legit 6-8, 240 pounds right now. I like these kinds of guys, low maintenance, no distractions, focused and want to be the best they can be.”

On the balance between an inexperienced team and a non-conference schedule…
“I took all of the rosters in the SEC and I assigned four points to a freshman, three points to a sophomore, two points to a junior and one point to a freshman. After adding up the numbers for each team, LSU is the youngest team in the Southeastern Conference. LSU is first with 44 in the conference, followed by Florida with 42. It is ironic that all these magazines pick Auburn to win our side of the SEC. Auburn is the most experienced team in the SEC West, with four starters back. Along these lines, I wanted to know where our schedule is. Our strength of schedule as compared to other schools in the SEC is 6th. We are dead in the middle based on last year’s RPI and with our inexperienced team. To me that is a pretty good balance. I wouldn’t want to have the most inexperienced team in the SEC with the toughest schedule. I don’t think that is the way to do it. Our non-conference schedule is better than last year. We play UAB in the Sugar Bowl and they beat a good Marquette team in the Conference USA tournament last year. We play Tulane as well. There are four Conference USA teams on our schedule. There is a varied opinion of how we develop in several of these preseason magazines. I want our team to get to know one another in a different way in team building exercises with coaches and players alike. It has given us a chance to be closer together. Once we go through challenging well thought-out practices we will get even better. Once you go through some challenging, demanding times with young people you become stronger. I like this team and its approach and competiveness. We are going to have some teaching, but that is okay. Last year we just guided at times because they already knew everything. If I had to choose experience or talent, I would certainly take talent and then bring it along with some experience. At the right time you can always gain some experience by playing, but you can’t get talent once the season starts. I like where we are and I like the schedule. I just believe this team is going to have a special year as it grows and matures. Based right now on what they have done to this point, people should be excited about this team and come watch this team play.”

Men’s Player Quotes
Antonio Hudson (Jr., Guard)
“We’ve been predicted to finish high in the (SEC) West, and I just can’t wait to prove them right. The worst thing to do is to not meet expectations, so I just want to make sure the team comes out and plays well.

“This year, we have some real talented players coming in. They have a lot of potential; the only thing is that we have to find a leader. If the leadership is right on the team, then the team will be right. “The freshmen got better as players and better as people as the summer progressed. They’ve seen that we have to play together in order to have success. They got some experience by playing in the summer, but it’s still not the real deal.”

Brandon Bass (Fr., Forward)
“I haven’t thought too much yet about our outlook for the season; I’m just trying to get ready to start practice and work in our strength and conditioning program. Right now, we’re just trying to get to know each other and understand each other.

“We’ve got a lot of talent; if we work hard in practice, we’ll get it done on the floor. The team may have lost some of its leaders from last year, but I think we’ll still be alright.”

Tack Minor (Fr., Guard)
“I’ve had to learn the other side of my game since I’ve been here; I can’t score as much as I used to. I have to concentrate on passing, so I’ve been working on that all summer. I pass the ball, and when I’m wide open, I’ll take good shots. I’m trying to develop into an all-around point guard.

Jaime Lloreda (Sr., Center)
“We’ve been working very hard since the end of last season. We have a lot of new guys this season, but they have done a great job in adjusting to our system. I think we are going to have a very good year.

“Brandon (Bass) has improved a lot since he’s been here, and he already was very good. He’s adapted to Coach Brady’s system, and he’s going to be all right. He’s a very physical player, and I think he’s ready for the college game.”

Darrel Mitchell (So., Guard)
“I think I did a so-so job last year, and I could have done better. This year I plan to do an excellent job, just step my game up more.

“The freshmen will have a major impact, because they are coming in as the No. 1 recruiting class in the nation. They should help out a whole lot.

“We’re coming along pretty well, considering that we’re young. I believe that when practice starts and we start running drills together, the team chemistry will be excellent. Antonio (Hudson), (Xavier) Whipple and I are going to have to take on the leadership role that our seniors had last year.”