Softball Ranked No. 9 in All-time Poll 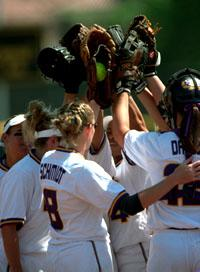 BATON ROUGE — In just seven short years, the LSU softball program has gone from its inaugural season to being ranked the ninth-best all-time program by the National Fastpitch Coaches Association.

The USA Today/NFCA All-Time Top 50 poll was compiled using the points each team received in the voting polls for the weekly rankings from the 1995 season to the final poll of 2003.

Two teams – Arizona and Oklahoma – have been ranked in every poll since its inception and Arizona tops the all-time list, finishing in the top five in every year that the poll has existed.

The Tigers have now has been ranked in the coaches poll for 81 consecutive weeks dating back to Feb. 28, 1998. In all, LSU softball has been ranked in a total of 83 of the 95 polls that have been released since the program was reinstated in 1997.

The Tigers were the highest of five teams ranked among Southeastern Conference schools. Other SEC schools in the poll including No. 13 South Carolina, No. 19 Alabama, No. 36 Georgia and No. 47 Mississippi State.

LSU will begin the 2004 season with the Tiger Classic from Feb. 6-8 at Tiger Park. The Tigers will begin play against Centenary at 2 p.m. on Feb. 6. LSU will also take on Oklahoma, which was ranked No. 5 in the all-time poll, Illinois and Southeastern Louisiana in the three-day tournament.