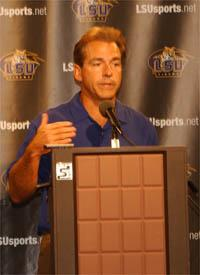 BATON ROUGE — LSU head football coach Nick Saban addressed the media Monday at his weekly press luncheon from the 5th floor conference room at the LSU Athletics Administration Building. The transcript from the press conference is below.

Archived video is now available to members on www.LSUsports.tv

Opening Statement
“There are three things that we always talk about that kind of define our identity as a team. We call them the three Is. Immediacy, which is a since of urgency, Intensity, and Intelligence that you play with. That is what we really want to take pride in terms in how we want to compete in the game. I don’t think that we played with any of those things, and if we want to be a dominant type team, then it is very important that we get back to playing that way. I think that we didn’t play very smart in the game. We made mistake after mistake, penalty after penalty, and shot ourselves in the foot quite a few times in the game. I think that some of that occurred not from being prepared to play the game, but especially on offense we made four or five good plays in the first few series. When we didn’t have immediate success we seemed to get a little bit frustrated, and when we got frustrated it seemed like we lost our poise. When we lost our poise we lost our discipline, commitment, and belief in playing with good fundamentals, and started making a lot of mistakes. Then that led to a lot of poor judgments, and a lot of bad decisions about what we did and it really effected our execution.

“We certainly did not have the kind of success that we wanted to have in the game on either side of the ball. The one thing that was a positive I thought was that we played pretty well on special teams. We had a lot of good effort, a punt return for a touchdown, and control of field position. Donnie (Jones) punted extremely well in the game.

“Defensively we seemed to play a little bit better as the game went on, but the big plays they made in the game especially three of them, were critical in terms of field position and points. I think the message to the players is very clear that this is not the time for everyone to get emotional and start yelling and screaming about what happened or didn’t happen. I think it is time to get technical in terms of everybody believing in certain fundamental disciplines that have to occur for us to have success. On defense its discipline and eye control, looking at the right things or covering the right guy. In our offense it is just the basic fundamental execution that we need to get more consistent at. So that we can make plays, and utilize some of the good players that we have.

“Players have to be committed to it, understand it, and believe it. If they don’t believe that their technical execution and fundamental discipline is that is important to have a success, then we will have problems. That is what I have asked the coaches to emphasize with the players. So that the players will believe in that, and help them be successful. It is what we have always believed, but some kind of way you get away from that. Maybe it is because you expect to have success, and when you don’t have it you get frustrated. When you get frustrated you lose your poise, and instead of taking a deep breath and kind of saying-I remember how to shoot that foul shot I don’t need to short arm it-you just start short arming it. Whenever you do that you don’t make very many. I think that happened to us a little bit in the game.”

On injuries…
“From an injury stand point, Joseph Addai (MCL left knee) is out probably for this game, (running back) Shyrone Carey (MCL left knee) will do some running today and is still questionable, and (strong safety) Jack Hunt (MCL right knee) will start practicing today. Depending on how he performs in practice during the week will determine if he will play in the game. (Defensive tackle) Melvin Oliver has a hyper-extended knee that I didn’t know about until after the game. He played with it in the game. He will miss a day or two of practice, but should be okay by later on in the week.”

On South Carolina…
“South Carolina is a very good football team, and they have one of the best defensive football teams in the SEC by only giving up 16-1/2 points a game. I think they have some weapons on offense. Their quarterback is a very good athlete, and has improved as a passer. They probably have a little more balance this year than what they maybe had last year. Dimitrius Summers is an outstanding running back, and he has made a lot of people miss. He has made some big play runs for them this year. I think Troy Williamson is a very good receiver. They are always good on special teams. Lou (Holtz) always has a trick or two for you. They got in that spread punt on us last year, and kind of messed all our punt returns up. He always has something up his sleeve, and a lot of time you see it in special teams. I think it is a time when you really need to be sound and solid in what you’re trying to do on all those things. We have to play on the road, and it is a tough place to play. Our players are going to have to be in the right frame of mind.”