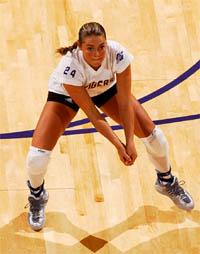 STARKVILLE, Miss. — Using a season-high 10 service aces, the LSU volleyball team swept Mississippi State on the road, 30-21, 30-24, 30-26, on Sunday afternoon in the Newell-Grissom Building for their first Southeastern Conference sweep of the season.

With the win the Tigers improved to 8-11 overall and 3-4 in the league. Mississippi State dropped to 1-15 overall and 0-6 in conference play. LSU has now defeated the Bulldogs in 10 consecutive meetings dating back to the 1998 season.

“I though we bounced back very well after a tough loss on Friday night,” said LSU head coach Fran Flory. “I thought we got into a nice rhythm on our side of the court and caused problems for them with our serving scheme. As bad as our trip was early in the weekend, I thought it went as equally well today.”

Regan Hood led the Tigers with 14 kills, six blocks and a career-high four service aces. The junior from Carrollton, Texas, also hit a team-best .385 for the match with eight digs.

Lauren Leaumont also had double-figures in kills with 10, while Kassi Mikulik recorded her third-consecutive double-figure digs performance with 10. Mikulik also had a career-best two service aces.

LSU surpassed its largest ace total of the season with 10 against MSU. The team also hit .200 for the match, compared to just a .078 clip for the Bulldogs. The Tigers also outblocked MSU, 10-7, and outdug the Bulldogs, 40-33, helping them to their first three-game victory in SEC play this season.

With five service aces, including three by Hood, the Tigers opened up with a win in game one against Mississippi State. Leading by one, 14-13, the Tigers went on a 9-0 run to break the game open. Leading 28-15, the Bulldogs came back to cut the lead to eight points, 29-21, before a service error gave LSU the game, 30-21.

In the second game, LSU took the lead, 3-2, and never trailed from that point in the game. Using seven kills by Hood, the Tigers led by as many as six on two occasions, 19-13 and 25-19, before MSU closed it to two, 26-24. After an LSU timeout, the Tigers scored the final four points of the game to take the two-game advantage to the locker room, 30-24.

With the score tied at nine in the third game, LSU went on an 11-3 run to take a 21-12 lead, its larges of the game. The Bulldogs rallied back to tie the match at 25. The Tigers then scored five of the final six points, including an ace by Beth Cowley, the final of the Tigers’ season-best 10 aces, to take the game and the match 30-26.

The Tigers will hit the road for a rematch with Kentucky and South Carolina next weekend. LSU defeated Kentucky in five games in Baton Rouge, while dropping a three-game decision to the Gamecocks at home in September. The Tigers will take on the Wildcats in Lexington, Ky., on Friday at 7 p.m. CT before facing South Carolina at 1:30 p.m. CT on Sunday.