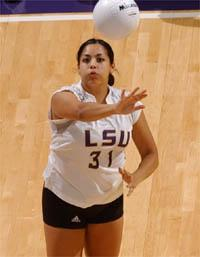 With the loss, the Tigers fall to 7-11 on the season and 2-4 in Southeastern Conference play. Now 3-1 in five-game matches, LSU entered the match having defeated UAB, Auburn and Kentucky in five this season.

Ole Miss improves to 3-15 on the year and 2-3 in league play. The win snapped the Tigers’ four-match win streak over the Lady Rebels and marked the second straight meeting the match went the distance, after LSU defeated Ole Miss, 3-2, in Oxford last season.

Regan Hood led the Tigers with 21 kills, while hitting at a .395 clip. The junior also recorded seven digs and four blocks. Lauren Leaumont added 19 kills for LSU, including eight in the fourth game, while Melody Clark and Markeisha Constant each added 10 kills.

The Tigers came out early and established dominance in game one. LSU took the 6-0 lead to start, with two service aces by Romero, two of her three for the game. Ole Miss got as close as three points, 10-7, before the Tigers went on a 9-3 run to pull away and never let the Lady Rebels back in the game. LSU went on to take game one, 30-16.

The third game began much like the second, as the Lady Rebels began the match with a 7-2 lead. The Ole Miss advantage expanded to 15-6. The Tigers were able to get back as close as seven points, but 19-12, before a 10-3 run gave the Lady Rebels game point. LSU fought off game point three times before Ole Miss won the game, 30-17.

With the Tigers trailing, 3-2, in the fourth game, LSU went on a 7-0 run to take control of the match. The Tigers would extend the lead to 18-10 before the Lady Rebels got back as close as four points, 24-20. LSU once again pulled away and on game point, Romero recorded her fourth service ace of the game to even the match at two games each, 30-24.

In the decisive fifth game with the score tied at four, LSU used a 3-0 run to take a 7-4 lead. Ole Miss came back to tie the game at nine. The Tigers fought off one match point before a blocking error gave the Lady Rebels the match, 15-13.

LSU travels to Starkville, Miss., to take on Mississippi State on Sunday at 1:30 p.m. The Tigers have won nine straight over the Bulldogs and have not lost in Starkville since 1997.