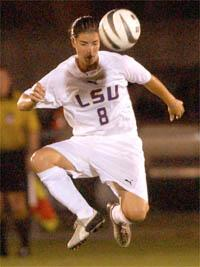 BATON ROUGE — The LSU soccer team fell to the Ole Miss Rebels in its home conference opener by a score of 3-0 on a rain-soaked field on Friday night at the LSU Soccer Complex.

The Tigers (7-4-1, 0-3 Southeastern Conference) battled the Rebels to a 0-0 tie at the half but Ole Miss responded with three goals in the second period, including two by midfielder Amy Sample to improve to 2-1 in the SEC and 11-2 overall.

“I just think the difference in this game was a couple of key plays in the second half, you know we got caught on a counter attack on the first goal and they slipped in and got the goal and the second goal was a deflection in which we caught a bad break, and sometimes that happens in the game,” said LSU head coach George Fotopoulos. “Obviously we are a very young team, we played better tonight even though the result was worse than our first two conference games, but we are not finishing our chances and our very immature up front.”

Ole Miss took a 1-0 lead at the 71:10 mark as forward Hillary Beckman took a pass from Sample and snuck the ball into the net past Tiger goalkeeper Robyn DesOrmeaux. Beckman scored for the second time in the game at 73:59 when she deflected a shot attempt by teammate Kristal Menard in the goal. This put Ole Miss ahead 2-0. Amy Sample capped the scoring for Ole Miss with an unassisted goal following a corner kick at the 81:45 mark.

The match, played on a field soaked by an entire day’s worth of rainfall, featured only 20 total shots, 10 by each team. Ole Miss recorded six shots on goal while LSU finished with just two.

LSU will face Mississippi State on Sunday at 2 p.m. to complete its initial conference weekend at home. Sunday’s match will feature the POWERaDE Pep Rally. Cheerleaders, pom-poms and a hi-energy spirit competition are all part of the fun.