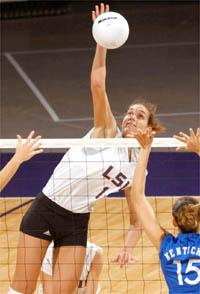 BATON ROUGE — The LSU volleyball team will travel to Oxford, Miss., to face Ole Miss in the first of a two-match Mississippi road trip on Friday at 7 p.m. in the Gillom Sports Center.

The Tigers (7-10, 2-3 SEC) are coming off five consecutive home conference matches. Following the match with Ole Miss, LSU will take on Mississippi State in Starkville, Miss., on Sunday at 1:30 p.m. The Rebels (2-15, 1-3 SEC) have lost three straight conference matches, all on the road, and eight of their last nine.

Last season, the Tigers took a pair of matches from Ole Miss, winning 3-0 in Baton Rouge and 3-2 in Oxford. In that last meeting, Regan Hood led the Tigers with nine blocks in the five-game match, tying her career high. In the decisive fifth game, she recorded six kills and a block and was responsible for six of LSU’s final nine points.

The Tigers are 36-9 all-time against Ole Miss, including a 15-3 record in Oxford. LSU has now won four straight and eight of its last nine against the Rebels.

For Ole Miss, Elena Garcia leads the Rebels with 3.80 kills per game and 3.78 digs per game, second in the SEC. Rachel Refenes leads Ole Miss with 1.26 blocks per game and a .263 attacking percentage.