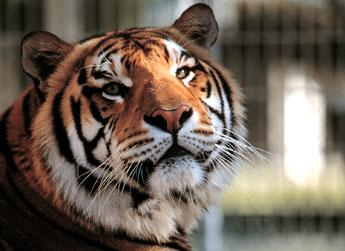 “The University is for the students and Mike is LSU,” said DeLaine Emmert, wife of Chancellor Mark Emmert.

DeLaine Emmert, along with the Tiger Athletic Foundation Collegiate Club and LSU’s student media, will kick off the event announcing that students have raised $52,000 for Mike’s new habitat, with their goal set at $100,000.

“I hope all of Mike’s friends, and especially his favorite students, will come out and help us celebrate Mike Day on Friday. It’s a perfect occasion to show support for the effort to build Mike a new home, and the fun should get everyone excited and ready for Saturday’s big game,” said Chancellor Emmert.

For a donation of $10 or more, those in attendance will receive lunch contributed by Podnuh’s, Ralph and Kacoo’s and LSU Dining, birthday cake donated by Winn-Dixie and a special Mike the Tiger T-shirt compliments of TAF. This event is part of the “I Like Mike” campaign designed to raise money for the Bengal tiger’s new home.

DeLaine Emmert and Bill Hulsey, former Tiger Athletic Foundation president, began the “I Like Mike” campaign as a grassroots effort in the fall of 2001. They hired Torre Design Consortium, LTD to design the $2.5 million project, of which $1.5 million has already been raised.

“Since 1926, Mike the Tiger has belonged to the LSU student body. Therefore it is fitting that the student body has taken an active role in providing Mike V and future ‘Mikes’ with a suitable enclosure; one that will promote optimal health, and will help educate visitors to the global challenges faced by the tiger as a species,” said Dr. David Baker.

The new habitat will be 15,000 square feet and will feature a waterfall, swimming pond, natural grass and an observatory to view Mike. Construction on the project will begin after the completion of fund-raising.

Current fund raisers include purchasing bricks for $100 that will be engraved and used in the construction of Mike’s new home, and joining Tiger Athletic Foundation Collegiate Club. In addition, Louisiana artist George Rodrigue recently agreed to contribute a Mike the Tiger painting to the fund-raising efforts.

Mike is the fifth Bengal tiger at LSU, and he was donated by Dr. Thomas and Caroline Atchison of the Animal House Zoological Park in Molten, Ala. He began his reign as mascot on April 30, 1990, and will celebrate his fourteenth birthday on Oct. 18.

Contributions to the “I Like Mike” campaign can be made through Tiger Athletic Foundation by contacting Michael Boudreaux at 225-578-4823.

More information on Mike the Tiger’s new habitat and the “I Like Mike” campaign can be found on the web at www.mikethetiger.com.