Tigers Continue to Practice for Florida 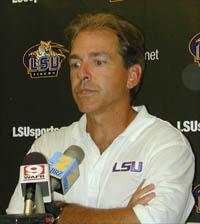 The Tigers, who are 5-0 overall and 2-0 in league play, will practice again on Thursday followed by a walk-thru in Tiger Stadium on Friday. Kickoff for Saturday’s contest is set for 2:30 p.m. in Tiger Stadium. LSU fans are encouraged to wear white to the game as the theme for the nationally-televised contest is “White Out Florida”.

Florida is coming off a 20-17 loss to Ole Miss on Saturday and the Gators stand at 3-3 overall and 1-2 in conference play. Last year, LSU posted a 36-7 win over the Gators in Gainesville.

“I think the players are a little bit tired of practicing,” LSU coach Nick Saban said after Wednesday’s workout. “Anytime you have a bye week, you get into having more practices than your normal routine between games and I think that starts to wear on the players a little bit. We have had a lot of good practices for this game.

“We have worked hard during the bye week to try to get the younger players some additional reps so they could do a little bit better job and make a little bit more contribution and add to the depth of our team.”

Saban said that despite its 3-3 record, Florida still has a very good team and that LSU better be ready to play its best on Saturday.

“I have certainly preached to the players that this is a good team that we are playing,” Saban said. “Florida is one of the elite teams in our conference in terms of tradition and the type of football players they have and the kind of capability that they have. It is human nature to some degree for people to think that just because they lost a game or two to some very good teams that all of a sudden they have big-time problems.

Strong safety Jack Hunt (sprained MCL) and running back Shyrone Carey (sprained MCL) are both questionable for Saturday’s contest. Hunt worked out in a red jersey (non-contact), while Carey sat out of the practice. Saban said Carey is expected to run on Thursday for the first time since his injury.