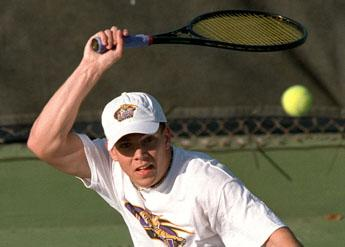 CHATTANOOGA, Tenn. — The number of Tigers still competing in the Icy Hot/ITA All-American Championships shrank to two Tuesday. LSU’s Bryan Fisher had the Tigers’ only win of the day in his first match of the tournament. He beat Alejandro Salazar of East Tennessee State, 7-6 (4), 6-0.

“Bryan played a strong first set,” said LSU head coach Jeff Brown. “When he won the breaker the other guy kind of fell off.”

Fisher’s teammates were not so fortunate. Jason Hazley met Georgia Tech’s Scott Schnugg in his first match of the tournament. Schnugg, the 65th-ranked player in the nation, beat Hazley, 6-2, 6-1.

Ken Skupski and Colt Gaston battled their way through the pre-qualifying round to the first match of qualifying, where they lost to Ohio State’s Joey Atas and Jeremy Wurtzman, 8-2.

Fisher and Hazley are still preparing to begin doubles play Thursday. The pair is currently ranked No. 7 in the nation.