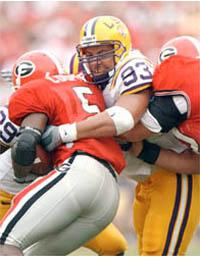 by Chris Macaluso
Special to LSUsports.net

As the LSU senior defensive tackle said, “Open up any newspaper or magazine around here in the past two years and you can find out what happened to me before I came to school.”

One can’t blame reporters for wanting to write about Lavalais’ struggles to become a Tiger. After all, it’s the sort of tale that makes for a good read. It’s the story of a young man blessed with more football talent than anyone can remember in Marksville, La., missing his chance to live out his dream of playing college football not once, but twice because of one measly point on his ACT. At the same time, LSU’s coaching staff didn’t give up on him despite his decisions to move to Atlanta to work at a Dillard’s department store and then move back to his hometown to work as a guard at the parish prison. Once he took the job in the prison, Lavalais was encouraged not to waste his gifts by the young men who had wasted theirs locked behind bars.

What seemed to be lost behind the warm-hearted, inspiring story of dreams coming true was the fact that Lavalais had the kind of size, speed and drive that make opposing offensive coordinators shudder. And, after talking to the soft-spoken, 6′ 3″, 290-pound mountain of a man, one can’t help but wonder if that’s exactly how Lavalais wanted it to be.

“I’m just happy playing college football,” Lavalais said. “I’m not really thinking about all the things I had to do to get here anymore. I’m just glad I’m here.” So are his teammates, sometimes.

“It’s hard to block against Chad in practice,” said senior offensive tackle Rodney Reed. “We have to double-team him all the time and run special plays. He just such a good player.”

Lavalais is such a “good” player he’s drawn comparisons this season to some great Tiger defensive linemen who have gone on to excel in the NFL. The names of Anthony McFarland, Chuck Wiley and Leonard Marshall have been batted around by announcers and writers who’ve watched Lavalais dominate offensive linemen this season.

But, according to Lavalais, those comparisons seem a bit much at this point.

“It’s nice to be compared to those guys because they were all such talented players,” he said. “But I’m not them and I’m not playing on their level right now. I’m just Chad Lavalais and this is my senior year here and I’m just trying to win now.” Lavalais was first signed out of Marksville High by the Tigers in 1998, but that one point on his ACT score kept him from moving to Baton Rouge. He was part of the 1999 signing class as well but was still hindered by that one point.

After receiving constant encouragement from his mother and participating in a strenuous workout program with his brother and friends, Lavalais finally earned his ACT point. He arrived on campus in time for 2000 fall practice, LSU coach Nick Saban’s first in Baton Rouge.

Lavalais acknowledges that it took him a little time to adjust to the speed of the game once he returned to football. He also remembers that it was a little difficult being the second-oldest freshman on the team behind only quarterback Matt Mauck, who is six months older. But, none of that seems to bother him now. In fact, he believes his two-year delay was a blessing of sorts.

“I just know that the 1998 and 1999 seasons were tough for the LSU team and that’s when I would’ve started playing,” he said. “I really believe that this was part of God’s plan for me. He has a plan for everyone. I think the two years helped me in some ways and since I got here we’ve been very good.” Lavalais has helped lead the Tigers to one of the most productive four-year stretches in LSU football history.

LSU finished the 2000 season with an 8-4 record that included a 28-14 victory over 15th-ranked Georgia Tech in the Peach Bowl. The Tigers returned to the Georgia Dome the next season to claim their first SEC Championship game win, 31-20 over second-ranked Tennessee, before moving on to dominate Illinois 47-34 in the Sugar Bowl. Last season LSU played against Texas in the Cotton Bowl after earning eight regular-season wins.

Lavalais has been fixed in the middle of the Tiger defensive front four since making his first start against Alabama in 2000. He recorded eight tackles and his first career sack in the 30-28 win over the Crimson Tide, LSU’s first home victory over Bama in over 30 years. He garnered national attention in the Peach Bowl later that season by recording one sack and two tackles behind the line of scrimmage.

He started every game but one his sophomore year, recording two sacks and leading the defensive interior with 53 tackles. Lavalais carried that production into his junior season by starting the year with 11 tackles, including one sack, against Virginia Tech in the season opener. He led all Tiger linemen last year with 66 tackles, including 8.5 for losses.

Lavalais has seemingly saved his best performance for his senior year. Five games into the 2003 campaign, he has recorded 15 total tackles, including five for losses and three sacks. He also blocked a field goal against Western Illinois in the Tigers’ 35-7 win.

Yet, the full measure of his worth for what is becoming a dominant LSU defensive squad is not found in the statistics. There is an exuberance in Lavalais’ play. He is exploding through opposing offensive lines with a ravenous attack and he always seems to be around the player with the ball, whether it’s the quarterback, running back or receiver. And while he may be soft-spoken and, according to some teammates, a bit of a clown off the field, Lavalais seems to be the definition of a player who leads by example.

He was the first defensive player to huddle his teammates around him last month after Georgia tied LSU 10-10 late in the fourth quarter with an improbable 93-yard screen pass for a touchdown.

“I got the guys around me and I told them ‘Look, that’s over and we can’t do anything about that, we need to go out there again and just play and give the ball back to the offense and let them do their thing,'” he said. “That’s what I’m trying to teach the younger guys. It’s going to get hard sometimes but we can’t dwell on mistakes. We need to be able to trust ourselves and move on.”

Lavalais said the effort he’s putting forth this season has nothing to do with what may happen after he leaves LSU but what he and his teammates hope to accomplish by the end of this year. The Tigers are off to their best start since 1973, and Lavalais and the rest of the squad are cautiously optimistic about what could happen by the end of this year if the effort continues.

“We’re off to a great start this year and from here on out I want to play every game as if it’s my last game and give the best I possibly can no matter who we are playing,” he said.

Still, the idea of playing professional football is lodged somewhere in his brain. Lavalais said for now, it’s in the back.

“If I have the opportunity to play next season in the NFL I will take advantage of it,” he said. “But personally I’ve just enjoyed playing college football. If you want to experience anything in life, if you have the chance to play college ball or just go to college, you should experience that. I take pride in just being able to make the plays.”