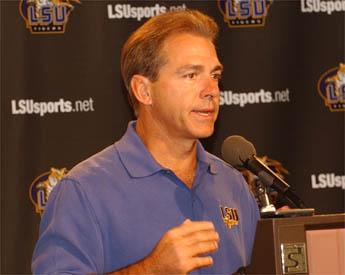 Opening Statement
“People always want to know is it a good time to have a bye week? What we do is look at the schedule and we know where they are and try to manage ourselves through them. We try to use them to make an advantage for our team in terms of resting certain players, playing certain players, and trying to get everybody healthy. The question that you always have is, once you get out of your routine of playing week end and week out, how do you focus for playing games. In some degree you want the players to take a break emotionally, because of the stress of preparing for games, but at the same time they have to refocus and get ready to go again.

That is going to be the challenge for us this week. There are certain teams in every league and certain teams in the country that have great tradition, and are elite teams in your league, regardless of what their record is are where they are right now, they still have that elite status. When play against those teams and have success against those teams that is the only way to get to their peer level. Florida certainly has that in our league, and they are the school tradition wise to have the most success over the last 12 to 15 years.

This team has excellent players on both sides the ball; they are very good football team, and they are very capable of being as good as anybody in our league. Any notion that anybody has that they are not a good football team I don’t think is correct. Regardless of what happened last week or two weeks ago, they still have those kind of players, those kind of expectations, and I think it will be real key for us to respect that. They score thirty-five points a game on offense. They have an outstanding two running backs, they have the best tight end in the league by far, and outstanding skill outside. They have one of the best quarterbacks in the league coming out of high school. He certainly has not handled his situation like a freshman, and has played very well for them.

Defensively they have a few guys hurt, but they are only giving up only seventeen points or so a game. They have a very good scheme on defense. They have an excellent, probably the best we have played against so far this year, and do a few more things than what we’ve played against this year. They have really good team speed, and excellent return guys. There is not really any part of this team that you do not really have to prepare for. I think they are outstanding football team.

I think the key for us, as always, is to get right back into the rhythm of the game, and executing like we need to, to have success. In games like this turnovers are always a big factor, just like it was in their last game. They had lots of turnovers in the fourth quarter, and if they had that would have been the difference. They are capable of making big plays, and it is important that we don’t allow that to happen with their special teams or their offense. Matt (Mauck) very consistently for us, and hopefully he will get even better. With all the things they do I think it will be a real key for him to be on top of his game.

We have to guys that are still questionable, (running back) Shyrone Carey (sprained MCL left knee) and (strong safety) Jack Hunt (sprained MCL right knee). They will be the only two players out of practice today, and they are still obviously questionable. Both guys are making good progress, but it is probably too early to tell whether both guys will be able to practice at the end of the week. If they can’t practice later in the week then probably can’t play in the game.”

How can you compare Matt (Mauck) from this point last season against Florida to now?
“I think that Matt (Mauck) has grown a lot as a passing quarterback. Last year we ran the ball a lot against them and he ran some too. He probably had his best game throwing the football to that point. This year he has been a little bit more consistent in terms of the passing game, but I think that is because the receivers have been a little bit more consistent. I think that we have done a pretty decent job of protecting overall, and we have had balance in our offense. He is a lot further along than a year ago when we played this team.”

Is the defense now where you thought it might be at the beginning of the year?
“We had concerns on defense, we have two freshman that started in Laron Landry and Kirston Pittman. Both those guys have done very good jobs, and we have had some other young players play as well. I am not disappointed in the way we have played on defense at all. With the concerns that we have had on defense things had to fall into place for us, and so far they have fallen into place. We’ve executed, we’ve got guys making plays out on the field, and I think it is important that we continue to do that. I’m pleased with the progressed we have made, but I think it is imperative that we continue to improve and play better through the rest of the season.”