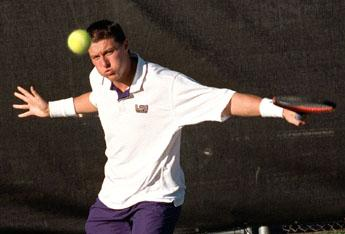 Skupski, a first year player from Liverpool, England, faces his toughest challenge of the tournament tomorrow when he plays SEC foe Vlad Obradovic of Florida for a chance to advance to the qualifying bracket.

“(Skupski and Obradovic) are two of the top newcomers in college tennis,” said LSU head coach Jeff Brown. “It should be a really good match.”

“That was Danny’s best match as a Tiger,” Brown said. “He played really hard against a very good player.”

Skupski and partner Colt Gaston also advanced in doubles play thanks to 9-8 (3) a win over Arkansas’ Rohan Gajjar and Imran Ismail. The two automatically advanced another round to the pre-qualifying finals after their scheduled opponents defaulted. They will resume play Tuesday.