Volleyball Falls to Alabama in Three 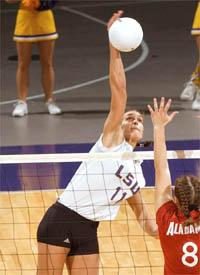 With the loss, the Tigers drop to 7-10 overall and 2-3 in league play. The Crimson Tide improve to 7-8 on the year and 2-3 in conference action.

In the first game, LSU fought off match point three times to tie the game at 29 before taking the lead, 30-29. The Tigers could not take advantage as the Alabama tied the match. LSU fought off two more game points before the Crimson Tide took the game, 34-32, on a service ace by Erin Price.

In the second game Alabama took the early lead, 7-2, and went on to win the game, 30-16. In game three, the Tigers jumped out to a 13-9 lead. Leading 16-12, the Crimson Tide used a 6-2 run to tie the game. Three straight points by LSU gave the Tigers the lead, only to be countered by three-straight by Alabama to tie the game at 23.

“I am disappointed in our performance today,” said LSU head coach Fran Flory. “We earned some opportunities in the first game to come back and I think we lost some of our confidence when we did not come through with the win. We worked hard and really earned our way back into the match and then to give it away on silly errors was unfortunate.

“I don’t think we went up against a team that was really superior to us, although give credit to Alabama because they outplayed us, but we made mental errors and silly mistakes that gave them the game.”

LSU was led by Regan Hood with 12 kills. The junior also led the Tigers with five blocks, including two solo blocks. Markeisha Constant added 11 kills and two blocks for LSU.

LSU takes to the road next weekend for the first two of four matches on the road. The Tigers travel to face Ole Miss on Friday at 7 p.m. and Mississippi State on Sunday at 1:30 p.m.