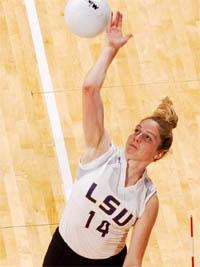 BATON ROUGE — Coming off back-to-back five-game victories, the LSU volleyball team closes out a five-match Southeastern Conference home stand on Sunday against Alabama at 1:30 p.m. in the Maravich Center.

The Tigers will celebrate All-Sports Day at the match with representatives from several sports available to sign autographs. One lucky child will also go home with a bicycle as part of the “Bikes for Tykes” promotion.

LSU enters the match with a 7-9 overall record and a 2-2 record in the SEC. Alabama dropped a four-game match to Arkansas to enter Sunday’s match at 6-8 overall and 1-2 in league play.

“We will have to do a very good job of being efficient offensively,” said LSU head coach Fran Flory. “We will also have to maintain our ball control and step up offensively to be successful. We are coming off two key five-game wins which have given our young team some confidence and we want to keep that going.”

This season, the Tigers are led by junior Regan Hood. The Carrollton, Texas, native ranks first in the SEC in kills per game at 4.65, and leads the team in block solos. In addition, she ranks second in digs and total blocks. With nine blocks against Auburn on Friday nigh, she recorded the 200th block of her career.

Freshman Melody Clark recorded career-highs in kills and blocks against Auburn, stepping in for the injured Megan Heinz to help lead the Tigers to victory. In the crucial fifth game, she recorded three of her eight kills, including the game winner at match point.

“Melody came through huge for us against Auburn,” said Flory. “She had kind of been waiting in the wings but when Megan got hurt, she finally got her chance to shine and she took advantage. She made a big impact for this team.”

Freshman Daniela Romero has also proven to be a valuable addition to the young LSU lineup despite a persistent leg condition that limits her practice and playing time. The Arlington, Texas, native, leads the team in attacking percentage and ranks fourth on the team in digs, despite playing in just under two-thirds of the Tigers’ games. In addition, the setter leads the team in assists and ranks in the top 10 in the league in assists per game.

On the other side of the court, Alabama is led by junior Erin Heffner, who is averaging 4.19 kills per game. Junior Julie Farley leads the team with 1.06 blocks per game, while senior Erin Price leads the team in assists.

LSU takes to the road next weekend for the first two of four matches on the road. The Tigers travel to face Ole Miss on Friday at 7 p.m. and Mississippi State on Sunday at 1:30 p.m. LSU will then face rematches with Kentucky and South Carolina on the road the following weekend.