Volleyball Comes From Behind to Defeat Auburn 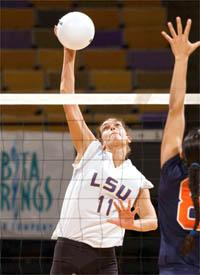 With the win the Tigers of LSU improved to 7-9 on the year and 2-2 in league play. Auburn dropped to 9-6 overall and remains winless at 0-3 in conference action.

After losing the first two games, including a tight 31-29 first game, LSU came back to take the third and fourth games to send the match to a decisive fifth game, marking the second-consecutive five-game match for the purple and gold Tigers. Trailing 7-4 in the fifth game, LSU scored six straight to take the 10-7 advantage before going on to take the game and the match, 15-13.

“The biggest factor in our play at the beginning of the match was the loss of Megan Heinz,” said LSU head coach Fran Flory about the sophomore middle blocker who sprained an ankle and was unable to play. “Without Megan Heinz we spent the first two games trying to figure out who was going to provide what in terms of our team spirit and competitiveness, things that Megan normally gives us. I think we were trying too hard.”

Recording only one service ace in the first two games, the Fighting Tigers came back with four in the final three games. Freshmen Daniela Romero and Kassi Mikulik each recorded a pair of aces, while Lauren Leaumont had one.

“Our serving strategy finally broke them down. We kept serving them short, short, short and finally they couldn’t come up with an answer for it.”

Leaumont led LSU with 19 kills. Regan Hood followed with 17 kills, while Markeisha Constant had 10. Rachel Pittman led a trio with double-figure digs for LSU, recording 15 for the match. Hood had 12 for her sixth double-double of the season, while Mikulik had 11.

“Rachel Pittman came up with some key digs for us when we needed them late in the match,” Flory said. “She really make a difference for us.”

Hood led the team with nine blocks, followed by Romero and Melody Clark with six each, career highs for both. Clark also had a career-high with eight kills.

“Melody came through huge for us,” said Flory. “She has kind of been waiting in the wings but she finally got her chance to shine. She made a big impact for this team tonight.”

In the first game, LSU trailed by as many as five, 26-21, before coming back to tie the game at 29. Auburn went on to score the final two points to close out the game and take the lead. In game two, AU scored the final four points of the game to break a 26-26 tie and take the two game advantage into the locker room.

With the scored tied at six in the third game, LSU went on an 8-2 run to break the game open. Auburn got no closer than two, 20-18, the rest of the way as the purple and gold Tigers staved off elimination with a 30-25 win.

In game five, AU jumped out to a 7-4 lead before LSU scored six straight points to take the 10-7 lead. Auburn fought back to tie the game at 11 before LSU took the lead for good on a kill by Clark. A kill by Clark at match point gave the Fighting Tigers the win, 15-13.

LSU completes its five-match home stand against Alabama on Sunday at 1:30 p.m. The Fighting Tigers will celebrate All-Sports Day at the match with representatives from several sports available to sign autographs. One lucky child will also go home with a bicycle as part of the “Bikes for Tykes” promotion.