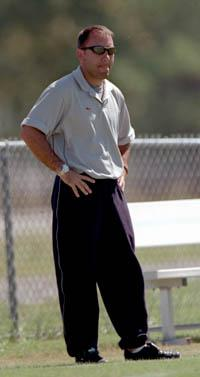 LEXINGTON, Ky. — The LSU soccer team dropped a 2-0 decision to the Kentucky Wildcats on Friday night at the UK Soccer Complex in the Tigers’ Southeastern-Conference opener.

Kentucky out-shot LSU by a 13-7 margin for the game and held a 10-1 advantage in corner kicks. The Tigers also picked up the game’s only two yellow cards.

“We just got out-played by Kentucky who was the better team tonight,” said LSU head coach George Fotopoulos. “We are just very inexperienced and we had some key players who did not step up tonight, and when that happens it is tough to win.”

Senior Stephanie Keating thwarted an excellent scoring chance for Kentucky with just over 28 minutes remaining in the first half as she knocked a ball out from inside the right corner of the net following a corner kick.

The Wildcats took a 1-0 lead when sophomore forward Ashley Schillig scored an unassisted goal on a breakaway, firing the ball into the right corner of an empty net at the 17:03 mark in the first half. Kentucky took the 1-0 lead into the half.

Kentucky out-shot the Tigers 7-4 in the first period and had seven corner kicks to the Tigers’ none as LSU was unable to control the ball for any extended period of time.

The second half began with a steady rainfall, which began just before halftime. The Wildcats had several scoring chances early in the second half, but were not able to capitalize until very late in the match.

Kentucky made it 2-0 as senior forward Elizabeth Ramsey scored on a direct kick with under 10 minutes to play in the match. Ramsey rifled the ball off the crossbar and into the net after the ball bounced at least twice just in front of the line before it was officially called a goal.

LSU could not dent the scoreboard against a Wildcat team, which had played arguably one of the tougher schedules in the nation coming into the match. Kentucky entered Friday’s contest having played four top-20 teams, which included a tough 2-1 loss to No. 12 BYU and a 2-2 double-overtime tie against eighth-ranked Duke.

The Tigers fell to 4-5 all-time in SEC openers and lost for the first time since a 4-3-overtime setback to Texas on Sept. 14.

LSU will face the Vanderbilt Commodores on Sunday at 2:30 p.m. in Nashville, Tenn., in a match that will be televised live on SEC-TV (Fox Sports Net South, Ch. 38 in Baton Rouge). Kentucky will face Arkansas on Sunday at 1 p.m.